Let’s get it kraken.

32 days after we left Phoenix, we flew back to Phoenix for a Dirty Heads concert, and a combined birthday party for two friends that was moved to accommodate our itinerary. The concert was most excellent (despite being outside at Mesa Amphitheater, in July, in 113°F/45°C heat).

The Elovators, Tribal Seeds, and SOJA opened. I forgot The Elovators were playing and missed them while waiting out the heat in the 10th floor hotel room next door. Jill wanted to see Tribal Seeds, but they went on before SOJA, so we missed them for the same reason. SOJA was awesome, though, and Dirty Heads never disappoint. T’was good, if not very sweaty, times—and the gold foil Let’s get it kraken poster was the first thing I had delivered to the new house.

You know it’s getting hotter and drier each year, but you don’t see it because it happens in tiny increments. It was summer when we left, but it still felt like late spring, I guess. In any case, this was the longest we’d ever been away from Phoenix in 20+ year and everything looked painfully dry—even the people. Sure, it’s a dry heat—and it’s wonderful—but damn.

Even just getting around was remarkable.

Sure, the driving was fine. We had a nice car—a blue, 2022 Genesis G70 with a Garrett-turbocharged inline-four—But it seemed excessive. Phoenix is all spread out. Something like 14,000 square miles. Iowa City is only 26 square miles. While we enjoyed going more than 25-30mph for more than five minutes, it was remarkable how much time we used to consider acceptable for simply going places.

We’re gonna keep going back, though.

I’m sure we’ll eventually consider Iowa City home, but right now, as much as I love Iowa City—and believe me, I fucking LOVE Iowa City—I need my family and friends. I need my primitive, public lands, and several more weeks spent exploring the Parashant.

So my next job has to be 100% remote. For the longest time, I thought the biggest downside of the internet was meeting all kinds of amazing people you’d never meet in person because there’s no way you could have a job and travel that much. A fully remote job, however, opens doors to couch surfing with family and friends around the world. Think: Using PTO for travel days, not time-there days.

And here’s another crazy idea: I could drive Fezzik west in the spring for the annual escape trip to the Parashant, Moab, etc., then leave him there for the summer so I can fly home and get my wheeling/camping fix. Come fall, I could drive the Miata down to Phoenix, then drive Fezzik home for winter weather.

I’ve had some exceptional interviews in the last two weeks. Got my fingers crossed for a smooth start to the next chapter. In the meantime, I’m coming to terms with the 23andme discovery I made a couple hours ago that is one, maybe two half-brothers my dad—for whatever reason—never owned up to.

And on that bombshell, I’m clicking publish. 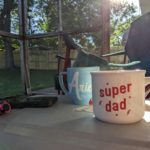 I'm still taxiing to the gate. 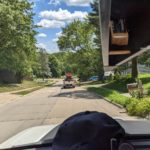 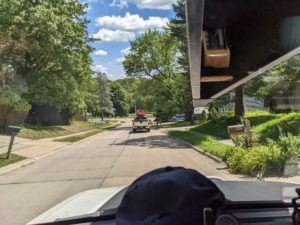 I’m still taxiing to the gate. 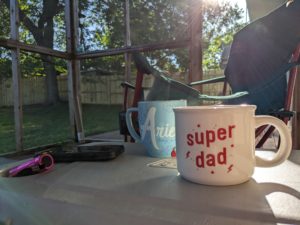 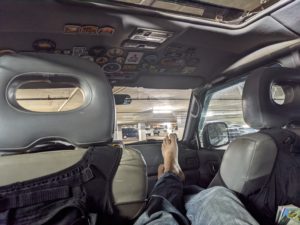