Group B was probably the pinnacle of stage rally. Modern rally cars and drivers have their charms, and may even outperform their more legendary forebears on paper, but the Group B days were so much more.

Motorsport, and rally in particular,  has always been dangerous. Primitive roads covering massive areas. Showroom stock vehicles converted into deranged, fire-breathing monsters. And vast swaths of fans, drunk on adrenaline, grilled meats, and beer, leaning into the roadways for a closer look around every corner.

Group B was unlike nothing we’d seen before or have seen since. Hill climbs bring some of the batshit crazy machines and spectator-lined stages, but not the rugged endurance of multi-day, crosscountry special stages across rugged terrain. Gambler and LeMons events bring the gritty, press on regardless mindset to small groups of friends and competitive family, but they’re homebrew beaters are the order of the day there.

The monsters of Group B are legendary. To date, I’ve interviewed owners of a couple Group B homologation specials. Damon shared Pebbles, his Audi Quattro with us. Andy told us about his Lancia Delta integrale. There’s something special about seeing such legendary machines on the street in the 21st century. We need more. I need more.

Enter the Renault 5 Turbo. It’s one of the more extreme machines to have come out of Group B. Where everyone else was figuring out how to shoehorn turbocharged engines and 4WD into their compact product offerings to maximize horsepower-to-weight-to-traction for Group B glory, Renault looked to what the Italians were doing with the mid-engined Stratos and took that approach to their FF supermini hot hatch.

I found this sinister machine on Instagram and reached out for the story. And what a story I found!

[tgp] Introductions: I know you’ve got one hell of an amazing Renault 5 Turbo 2. Could you tell us a little bit about yourself and your amazing machine to get things started?

[Helen] Alex, my husband, bought the car (his dream car) in 1994 for £5.4k after owning many hot hatches over the years. At the time it was pearlescent white and in need of some improvements.

In 2005, with the car value remaining stagnant to Alex’s surprise, we decided to sell her. The car was bought by a gentleman [named Yann] who came from Montreal, bizarrely, but worked for the UN (rewriting the legislation in Iraq at that time). The car was shipped to Marseille, France, to a specialist for a complete A-Z restoration.

We stayed in touch on and off over the years, reaching out to the owner in 2018 to ask if we could have the old number plates as a token of sentiment from our wedding and ownership. By then the car had undergone a complete shell respray but was still incomplete. The value, however, had increased 10-fold.

We expressed our wish for first consideration should he ever come to sell it—knowing that we would probably never be able to afford it if he did.

In the summer of 2018, we flew to Marseille to celebrate our twins’ 21st birthday in Provence and then Monte Carlo. We had thought about calling Yann to go see the car, but decided not to. Whilst in Monte Carlo, we received a surprise email from Yann’s sister that he had sadly passed away very quickly, having contracted malaria working for the UN. He was in Bangkok.

It was so sad as he was in his early 50s with a young daughter. His sister was living in Peru and the car was still in Marseille. We returned home and had much correspondence with Yann’s sister and agreed to help her understand the condition of the car with a view to buying the car back as this was her wish.

We went to Marseille and met the specialist who was storing the car for Yann at Autobodyshop Diffusion. He took us to a lock-up garage where the dusty car shell was under a tarp and surrounded by a million parts stacked in organised boxes. We had to bring her home and complete Yann’s restoration, so the car was brought over to the UK by JC at Autobodyshop.

JC had put us in touch with a specialist in the UK (Gavin) who had built his own Maxi Turbo. We hit it off straight away and he was thrilled to help us restore the car. We asked JC to rebuild the engine and we collected that later in the year.

Once we had all the car parts together, Gavin worked tirelessly to rebuild the car with regular input from Alex and I and, a week before our 25th wedding anniversary, we were reunited with the completed restoration.

[tgp] What an incredible story! Sad as it is that Yann never got to see his own automotive dreams for the car materialize, that you were able to work with his family to assume the mantle and complete the dream speaks volumes to the passion of the larger Renault community. What do you think of the current state of the Renault community? Do the R5 owners associate with, say, the Megane crowd, et. al.?

[Helen] [ FYI, we also own a Phase 1 Clio V6 so can appreciate the differences and similarities between the two. ]

Once we were reunited with the T2, we thought it might be a nice idea to chart the restoration on Instagram as a means of sharing the step by step process for Yann’s sister, us, and anyone who might find it interesting. We never imagined that this would become such an engaging platform and we can honestly say that we have built a network of really wonderful followers and following accounts and have developed good friendships along the way.

Generally, I would say that there is a Renaultsport community who are accepting of anything that falls into that category from a pimped Clio to a Group B Turbo. We all appreciate the engineering and enthusiasm for each model.

[Helen] The car engine spec is 240bhp from 1.4L, with a Garrett T3 turbo hung from a Cevennes 4-1 exhaust manifold, Omex EFI, intercooler upgrade, and fast-road camshaft upgrade. A 6-speed gearbox permits 160mph. It’s also running a high pressure oil pump and AP racing 4-piece racing clutch. One warning for all R5 Turbo owners is to replace aging fuel lines, as these perish and are the primary cause of fires.

Love about the R5T2 — Pulling away fast and feeling the back squat and pull down with the power. No power steering, so your arms get stronger, but you really feel the car. The binary boost is nuts! The car has so much positive attention on the road… everybody just loves it.

Not so much love about the R5T2 — Overtaking in a LHD car when on your own is a bit hair-raising. The current clutch was built for race with ceramic plates. This is tricky at low speed. I plan to replace it with an organic clutch. A common issue with T2s is that you need to check and adjust the spark plug gaps regularly. Also making sure that the engine doesn’t run lean on hot days because it uses the fuel to cool the head.

[Helen] Obviously the buzz at the moment is phasing out fossil fuels and car manufacturers are building better and more desirable hybrid and electric vehicles. I have also seen fantastic electric conversions of some classics too. This is likely to become the next phase of classic restoration.

I would like to think that classic cars will be given some protection/allowance to use fuel in the future—although I fear this may be at a premium. We certainly need to be thinking about the future impact on classic cars.

[Helen] If we were talking purely about our restoration journey then Gavin Allison (the guy who restored our car) has most certainly made the biggest impact on us. He is an excellent engineer and guided us step by step through the 11-month restoration. He re-engineered components, worked through Covid lockdowns, and called us almost daily to give us updates. We became the best of friends. He is ex-armed services so would literally take a bullet for you. We are eternally grateful for all that he has done.

This car would be special enough in its own right. Legit, WRC pedigree. 240-horsepower going to the rear wheels of a lightweight, hatchback that’s about the same size and weight as a 2021 Mitsubishi Mirage.

And what an incredible story, right? The car they drove to and from their wedding nearly 20 years ago. And then sold, considered gone forever, only to return home years later, fully restored because that’s what they ALL wanted.

Seriously. That sort of thing almost NEVER happens. It truly is an amazing machine.

Thank you so much, Helen, for sharing your story with us. Keep going fast with class and press on regardless. 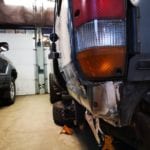 When is it time for a rebuild? 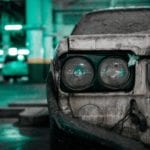