You’ve probably seen the otherworldly resto-mod rigs? Even dreamed about them…

Yes, it is out of reach for most of us, but we still watch in awe on social media as some magician revives an old 4×4. It has kept the vintage look and feel, but now has all the creature comforts and modern amenities you’d find in a current luxury marque. Everything from the paint, to the seat coverings, to the drive-train gets restored (actually, made better than new in most cases) yet it still appears to be the same vehicle to the casual observer.

Jonathan Ward’s Icon 4×4, just outside of LA, California, for example, takes old FJ40’s and early Broncos, and modernizes them for the new millennium via a nut and bolt restoration.

Along similar lines, Mohenic Garage in Paju, South Korea, has been applying the same next level restoration concept to our beloved first generation Pajeros since 2013. The results in both cases are absolutely staggering, with exteriors that look like they are fresh off the showroom floor, and interiors that would be at home in an art gallery.

Exclusivity, as usual, has a cost.

In 2018, the going rate for an Icon-restored FJ was around $200 000 USD. A Mohenic build starts somewhere in the $80k range. And values continue to climb.

While most of us can’t reach the stratospheric levels of these restoration wizards, there are some small things from the current technological revolution that we can take advantage of in terms of bringing our rigs forward into the new millennium. I’m not talking about revolutionary stuff like throttle body fuel injection in place of a carb. Sorry. Think smaller…

The Arc of Learning… err… Welding

If you recall recently in Part Three, I went through a large learning curve in fabricating new pieces to patch the rusty corners of my 1991 70 Series Land Cruiser. Now it was time to put them in place. Traditionally, patch panels are made one with the body using metal and arcing current, AKA welding. This is still the preferred way to go, and when done correctly, can turn two pieces of metal into one. But welding sheetmetal properly is not something you just start doing, ad hoc. And even when done properly, there is still the issue of corrosion to deal with.

Given that my welding skills were one level below “fledgling” and the fact that my welder was flux core, I looked elsewhere when it was time to unite my rusty trusty steed and it’s new hind quarters. My sights landed upon modern tech, in the form of “Panel Adhesive”.

Wait. You GLUED the truck back together?!

Admittedly, 2021 does not have us commuting in flying cars. But there are technological advancements. One of these is 3M’s Automix® Panel Bonding Adhesive, 08115. This “glue” (which doesn’t seem an apt word for the mixture) is a two part compound, and uses a fancy tip to introduce the two chemicals: they wine and dine, listen to some soft music… and next thing you know, they emerge out the other side fully married and working together as a bonafide super glue.

After creating a bevelled edge on my patch panel, I applied this space age epoxy to both mating surfaces, clamped the new panel in place, and let the magic happen. Within a day, the rear corners were solidly adhered and incidentally corrosion proof where old met new. Many OEM’s use it in non-structural applications to bond panels, and have been doing so for years, so it is proven to last. But being able to apply it at a consumer level and get such good results? It is a sign of the times.

The “Rust-O-Mod” 70 Series was now weatherproof. My angel was un-holey for the first time in many years. Time to turn inward.

One mod which is not new to the average home mechanic is upgrading the stereo system. This is more difficult to do on modern vehicles since their systems are so integrated. The steering wheel is connected to the audio system, which is connected to the climate controls, and OBD and CANBUS oversees operations… not easy to disenfranchise. On an old Land Cruiser however this is not really an issue. Power, ground, memory, speakers: that’s all you need. But what about modernization? Yes, here too you can take advantage of all the modern marvels, while still keeping it simple.

The Smart Phone is one of the biggest things to come to a vehicle’s infotainment system since the in-dash CD player. Okay, sure, that floating platform I had for my Sony DiscMan WAS pretty dope, but avoiding the bumps was a little distracting. Nowadays, in order to keep people off their phones while driving, OEMs and phone makers alike have been searching for ways to present the smartphone info into your dash in a way that doesn’t take you away from the task at hand.

The task is DRIVING by the way, in case you didn’t catch that…

Almost every major automotive manufacturer now has compatibility with these two apps. This in itself is a revolution, since car stereos and car companies alike have long been about as in-step with each other as I am at a country line dance. But consumer-driven demand is such that for 2021 you can get AA/ACP for virtually every vehicular platform. Aftermarket companies such as Sony, Pioneer, and Kenwood/JVC have followed suit. The infotainment system of the future is available now, at your local Radio Shack Best Buy! Android Auto/Apple Carplay displays mobile versions of many of your existing apps, in an at-a-glance format, perfect for occasional viewing while driving. Navigation and music control are at the heart of these systems, and they do the job extremely well, for a lot less than the cost of an ICON FJ.

The 70 Series, for all its analog glory, has a double DIN slot in the dash, just begging for an upgrade. Who was I to deny it some new school technology?

My truck is 24 volts, but there was an OEM converter under the dash which allowed easy installation. The original wiring harness had been cut off however, so after reinstating the correct pigtails, I got a Toyota adapter harness and grafted it onto my new Sony’s electrics. Then it was simply a matter of inserting the wiring plug plus an FM antenna jack, and connecting my phone to the USB cable snaking out from behind the dash. Streaming Spotify while navigating with Google Maps is suddenly doable in an old school one-wire diesel truck.

The light at the end of the tunnel

The last thing I wanted to address inside this truck was the dismal lighting. The 24 volt bulbs had, over time, slightly melted the diffusers, but even so, the 2 dome lights were pathetic. Lighting tech is another area that has seen vast improvement the last few years, with LED’s available for almost every application. But what about the 24 volt system, you say? Well, turns out that higher quality LED’s have a much broader range of acceptable voltages. After a spate of burned out LED panels, I stumbled upon a quality manufacturer that produced a 24 volt festoon style bulb which would not only fit my socket, but was MUCH brighter than the OEM’s, while consuming a lot less of my valuable power. Now when my door is open, it is like daylight inside, even with the sunroof closed. And because this rig is so basic, the LED panels don’t interfere with the electronics, like they do on many current vehicles. Yes, I said “current”. On purpose. 😉

Now, if only I could have massive dual cupholders, like a modern car. Then my interior would be really resto-modded! Hold on! New school tech had a solution for that too! Rob Smith at Odd Iron Offroad produces a sweet drop-in, 3D printed cupholder retrofit! It turns out, he also figured out the proper interior LED panels too, which would’ve saved me a lot of time… oh well.

I do have plans to leverage other modern conveniences, such as sound deadening, like brother Brian Driggs recently did. I’d also like to install a modern DC->DC converter to send the appropriate charge to my rear-mounted AUX 12V battery. For now, though, this resto-mod is feeling slightly modernized inside and out, by grabbing just a few easily attainable advancements from what would’ve been this rig’s distant future, and grafting them onto a platform that is still decidedly OLD SCHOOL.

Next time? Maintenance benchmarking, and some driving impressions, since this is ultimately what the truck is for… 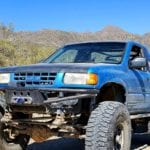