Continued from Part 1: How to… Project Adventure?

Sometimes the things that keep you from moving forward are the things you’ve placed in front of yourself. This is becoming clearer to me this winter, as I move forward on my new Project, a 70 Series JDM Landcruiser.

One of the things that has always kept me from taking on big projects, particularly outside summer time, is heat. Or rather – a lack of it. Canadian winters can get cold… really cold. And while my garage was built in 2008, with an extension in 2017, I never ever finished the “sealing the ceiling”. So even though the 2×6 walls had R30 stuffed in them, all the energy from my minuscule portable heaters wafted out through the roof. In early December of 2020, and with the global pandemic appearing to be months away from improving, my wife finally suggested: “Why don’t you just GET THE INSULATION FINISHED?”

As usual, she was right.

As soon as I had a buddy-contractor booked, I was forced to clean out the horde of junk stored in the rafters. Two days later my garage was fully enveloped in a pillow of pink fibreglass. Now that I could hold onto the heat, I figured I needed a better method to produce it! The following day I put my significant electrical panel to good use by buying and installing a 220 volt forced air heater. After that I decided to go all out, and insulated the long suffering uninsulated garden-side garage door. (The other 2 came insulated from the factory, but this one was a smaller, overhead door in the 12×12 annex.)

So as of three weeks ago, the biggest obstacle to working on projects was suddenly out of the way; I could go out in my garage whenever I wanted!

Other barriers fell in short order.

I dug out that small sandblaster gun that my brother had given me 10 years ago. I began practicing sheetmetal welding using the welder my wife had given me 5 years ago, after I got it out of the package and set it up. I bought a cheap metal brake and a mushroom dolly to go with my new bodywork hammer. Suddenly I was beginning to cut those rusty quarters out of the new project that caused me so many sleepless nights last fall after I bought the rig.

All the obstacles that have been keeping me from getting going on a project (that some might say was too ambitious to begin in the first place) are suddenly feeling more like opportunities to learn some new skills. Don’t get me wrong. I’m no kind of skilled body man, welder, or electrician. But now that my garage is warm, I have the time to practice, and hopefully I can slowly get better.

I’m realizing now that the cold garage may have been an allegory for all the other things I had been putting off because I didn’t think I could do them.

Here is some evidence of actual physical progress, beyond my improved mindset, to ensure that this project still continues to move forward (Yes, I have a lot of work ahead of me). In the next instalment I’ll dive into one of the areas I’ve tackled so far. It’ll likely be broken into phases, as I get a little done at a time.

Bypasses on this journey are not the goal. We are now gunning for the obstacles.

The biggest hurdle that I’ve overcome since I bought “Project Adventure” is my willingness to try things out. And that might be the single most important thing that I accomplish over the course of this project. Well, aside from having these two yahoos to bail me out when obstacles need moving, or “headlights” need showing off. 🙂 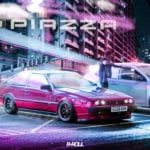 A Prescription for Isuzu Piazza Turbo

Yann's Titine: Sometimes they come back. 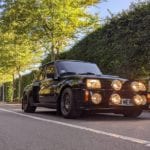