I’m dating myself a bit, but when I was in high school in the early 1990s, the Chevy Beretta—and it’s 4-door sibling, the Corsica—was in its prime. There was an Indy 500 Pace Car edition. And there was a super sleek Z26 model with all the trimmings. It seemed like there was a Beretta or Corsica around every corner.

And then they were gone.

When was the last time you saw a Chevy Beretta in the flesh? Probably been a while. I’m not sure why. I mean, I don’t recall ever hearing about the Beretta having some kind of common failure or issues, so I guess it’s probably just that they were a good value, fun to drive, and got used up.

Fortunately, I found this one. And, believe me…

[pm] My name is Patrick Mumford, I currently live in New Carlisle, Ohio, and I’m a parts store commercial sales manager. The lady and I take care of older ferrets and, when able, help at Five Points Ferret Refuge, a ferret shelter in Indianapolis. I love fixing up older cars in my free time, and enjoy cycling and cooking, and especially grilling!

[tgp] My understanding is you’ve got a Chevy Beretta. Is that correct? Can you tell us a little bit about it?

[pm] Yep, it’s a 1994 Chevy Beretta! Well, it started out as a higher optioned base model with a tach on the cluster, a trunk release, and a 3100 V6. It also has the 4T60E automatic. First year options for that engine and trans as well. It’s Bright White (mostly, it’s had lots of touch ups) with maroon interior, other than the grey Z seats. White cars and maroon interiors seem to be hard to find these days, even for Berettas.

I purchased this car back in May 2008, so I’ve owned it for almost 13 years now. It was… rough… when I bought it. It was a teenager’s first car, so it had been beaten. It’s a good thing I like my cars a little rough around the edges. It’s currently sitting at around 180k on the odometer, and was at 150k when I bought it. The engine that’s in it, however, only has around 45k on it.

[pm] My favorite thing about these cars by far has to be their body lines. The interiors seem to follow suit as well. The simplistic, but sleek and clean styling separates them from the other cars on the road these days. They’re peppy, sporty, fun little cars. They can also take a beating and just keep going.

The cons? If you see the rust on the outside, it’s a lot worse on the underside. Aside from how much I like the styling of the interiors, GM couldn’t make a good dash for these cars to save their lives. A friend and I were just discussing this a few days ago, and he hit the nail on the head when he told me, “I swear you look at the dash wrong it warps, peels or cracks.” The early door panels were the same way as well.

[tgp] How did you end up in this car? And what have you done to it?

[pm] Well, it started out with my first Beretta. An ’89 2.8 auto. Paid $100 for it, beat the hell out of it, repainted it, and sold it two years later for a more reliable vehicle. Purchased a 1995 Bonneville to replace it and, well… I hated that car. It was so boring. So one year later I put it up for sale, set back most of the money for a car I was restoring, a 1985 LTD Crown Vic, and bought the Beretta for $700 for a winter beater. I only drove it through one winter before that was put to an end! The restoration project was completed, and the Beretta became the new project car.

The car has an Indy body kit and a GTZ spoiler. Z34 Lumina hood vents have also been added. The headlights and taillights are both from a European model Beretta. On the inside it has Z26 seats, with custom Speedhut gauges and HVAC panel with billet knobs, and a Grant leather steering wheel.

The car is sitting on 17×7 Enkei EV5’s with 225/45 Federals, with Canuck lowering springs. Handling is increased by three underhood strut braces and an MRZ strut bar in the trunk, 32mm front and 21mm rear Z51 bars both solid, with a solid internal 17mm bar tucked above the 21mm bar. The car also has a Dodge Neon rear disc conversion, with all rotors drilled and slotted.

There are so many little details in this car, it’s easy to lose track of them. Currently I’m working on making new header downpipes, and finishing up some body work that I’ve been neglecting. Good projects are never finished.

[pm] The Neon rear disc swap isn’t easy, but also not difficult, if that makes sense. I already was replacing my rear axle assembly as it had rotted out, so it was a no brainer to just do it while everything was apart. I got lucky and a friend from New York was driving out to Milwaukee, Wisconsin, for [BerettaFest], and delivered me a “new” axle on his way through Ohio. You essentially need the backing plates, parking brakes, knuckles, rotors, pads and calipers. The knuckles have to be machined so the factory hub assemblies will fit, but it’s pretty straightforward. Here’s the link for the full write up.

[tgp] How’s the L-Body community doing these days? Where do y’all hangout, share tech, and whatnot?

[pm] The L-Body community is fantastic. There’s no better way to put it. We have our primary forum, Beretta.net, and we also have two Facebook pages. “Beretta.net Chevy Beretta Owners Group” for all Beretta related topics, and “Chevrolet Beretta Parts and Auto Sales” for exactly what the name implies. The forum isn’t too active these days but is FULL of archives, builds, and technical information. The Facebook pages stay pretty active though.

We also have a group event called BerettaFest, or Bfest for short. Forum members submit proposals at different locations with activities and events such as sight seeing with group, group dinners, test and tune at the local raceway, and picnicking with a group car show. It’s then voted upon by the forum members, to see which location is the winner for that year.

They’ve been doing Bfest since 1997, and they only had to postpone last year’s due to scheduling issues from places closing and restrictions. I made it to my first one, in Bowling Green, Kentucky, in 2019. I’ll never forget it either. I’d been told the group was like family, but never truly understood until I went. The cars may be what we all have in common, but the people are what it’s all about. The cars are just a bonus.

Just within the past year, we’ve lost a few forum members; two very unexpectedly, and the way the group pulls together is just amazing. Saying they’d give the shirt off of their back to help another is a major understatement, and I’m extremely proud to be a part of the extended Beretta family.

[tgp] Also curious, how well is the Beretta/L-body supported in the aftermarket these days? Are there still lots of upgrade options?

[pm] Aftermarket is a bit of a touchy subject, haha. Almost all of the aftermarket for these cars is, well, discontinued. Back in the “Fast and Furious” days you could get just about anything for these cars.

Thankfully we have some group members that are able to work out group buys for what’s still available. We have some members that have been able to reproduce discontinued pieces, and some that have fabricated upgrade parts for the group. You really have to keep an eye out for part-outs and fresh cars in salvage yards as well, as some replacement parts you just can’t find these days.

Engine swaps are rather common though! We have people swapping in 3400’s, 3500’s, 3800’s. We also have guys running superchargers, turbos, nitrous. We even have at least one 6-speed swap in the group. Thankfully the forum has plenty of write up’s to help with these swaps too!

[pm] The biggest issue that I’ve seen with car culture, in a nutshell, is that it still has problems evolving.

If it’s not a classic or a V8, some think it doesn’t belong. That’s horribly, horribly wrong. We have on another page that I’m on a member that has a MINT 1990 Sunbird. The car is just immaculate. He went to a show recently where he was laughed at when he was there, because it was, well, different. Most shows he doesn’t have this issue, but it’s still happening, and there’s just no reason for it.

If it’s not your cup of tea, that’s okay. It’s getting better, slowly, but it’s still an issue. What can we do about it? Continue to educate others, and stay open minded.

[pm] My uncles, for getting me into cars at a very early age. Taking me on rides in their classic Mopars when I’d head to my grandparents with my dad, telling me old racing stories, and showing me their newest mods. They’re all Mopar guys, but still love seeing my progress on my current projects, even if they are mostly GM’s!

Where are all the Berettas?

My guess is Beretta.net. And I’m glad to hear it. We need more forums these days, ya know? You know what else I’m glad to hear? That people like Patrick Murphy are keeping these amazing machines on the road—and even loving them enough to continue modifying them to this day. That’s pretty freaking rad.

Oh, and if you want to hear something cool, Mmmurph recently did some exhaust work… 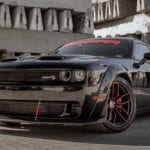 Destiny is a clean SVX