While You’re in there…

The Slippery Slope of Preventative Maintenance 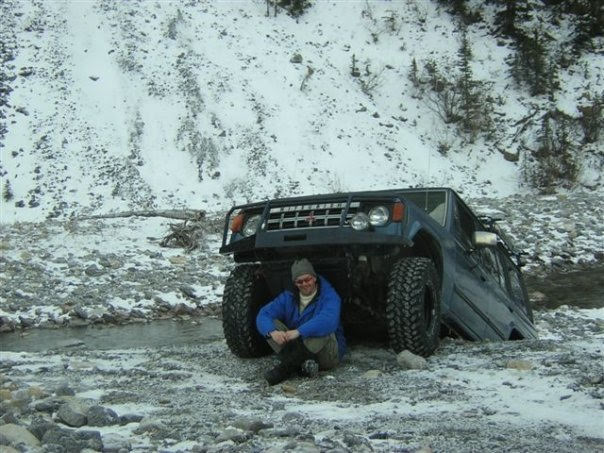 As gear heads who like to tackle things ourselves, we are always looking to maintain, fix, and improve where possible. When all three can be accomplished simultaneously, it is like a holy trinity of mechanical enlightenment, shining down from the shop-light on high…

More often than not though, it’s a matter of convenience. You’ve got this much apart. All it would take is a few more things out of the way, and then you could get to that. And oh yeah! If you’re that far in, you’d be remiss not to take care of this thing, and that thing and….

This is where I found myself yesterday, with parts all over my shop, and my daily driver in a state of disassembly/disarray. But I swear it didn’t start out like this. My intentions were much less ambitious.

Putting a fine point on the Shortcomings

So as you may have read last week, my wife’s truck was down with a case of misfire ( “If You’re Gonna Throw Parts At It” ), and she’d been driving the Pajero Evolution to work for a few days. When the weekend came along, she took my trusty diesel Prado since we we were getting snow, and the little 90 was shod in the appropriate boots. Along with the snow, we suddenly got blasted with arctic air, and by the time she was finished her shift, the mercury had dropped way into the negatives. When she got home, she mentioned that it took a few times to get the diesel to start. Being a bit of a snob when it comes to my vehicles, I sort of laughed it off, and asked how many times she tried. (Yes, I was planning on new glow plugs for next winter, but I generally plug in at work, so no real rush…)

“Seven what?”
“Seven tries… It took seven tries to start it.”
What? Okay, clearly her gasoline driving ways had gotten the better of her, and she’d forgotten to finish the glowplug cycle right? Wrong. She had watched for the “little light” but it ran rough then died. She had to attempt a start SEVEN TIMES.
Okay then. I knew what was on my agenda for the following week. Sufferin’ sonova… 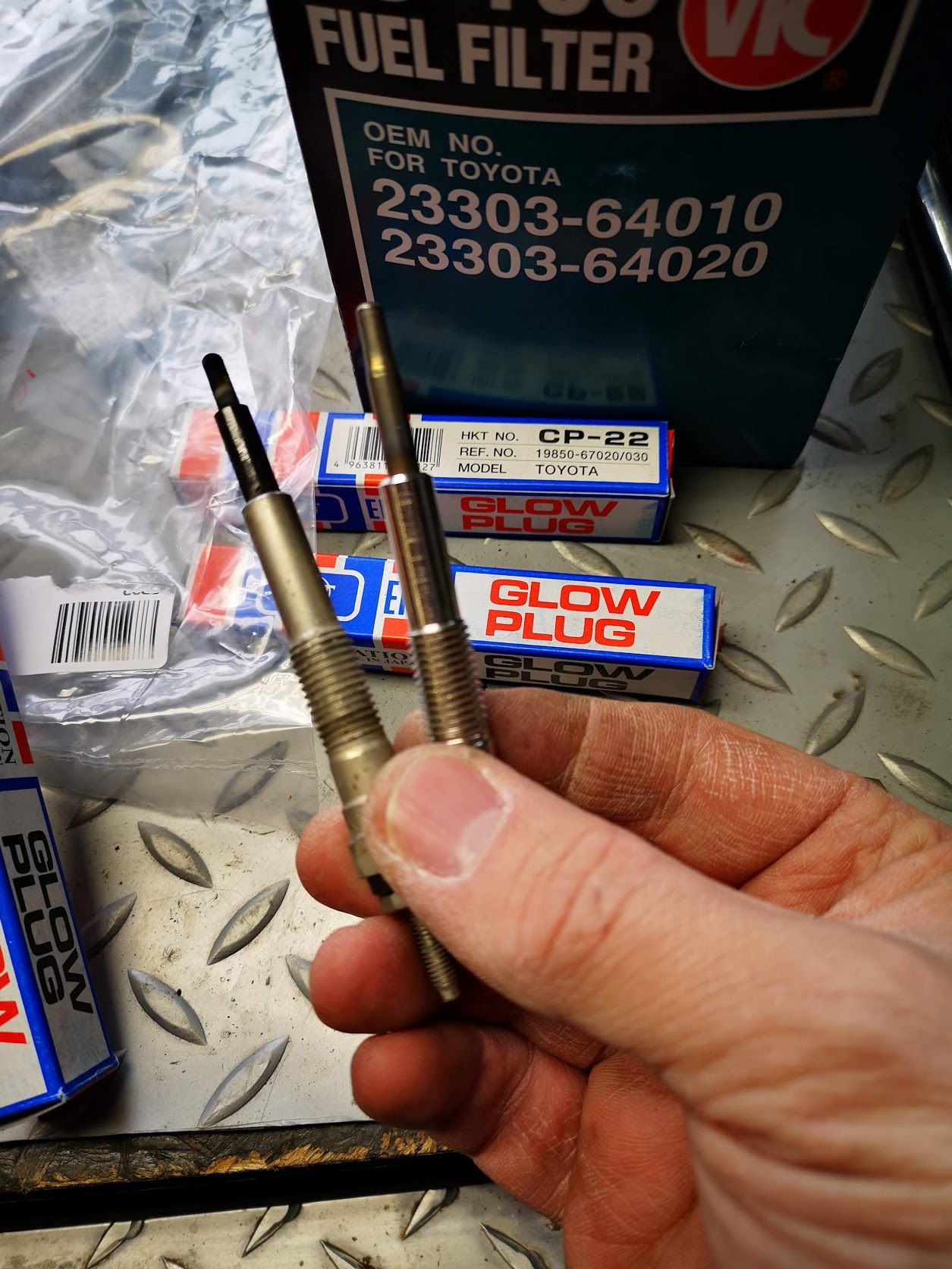 Possibly a little embarrassed, I quickly put the finishing touches on her 100 Series so she’d have a commuter again, and then ordered glow-plugs. This was on the cusp of the pandemic, but apparently freight was still moving, because I received them from Abu Dhabi in 4 days.

Most indirect injection diesels have their glow-plugs fairly accessible, and the 1KZ-TE is no exception. I pulled the intercooler and got to work. A leisurely 45 minutes later I was ready to button things up.

I started poking around the engine bay, and noticed signs of oily residue at the junction between my intake and the throttle body. Given how clean this rig is, the blowby was not hard to spot, and it got me wondering: “While I’m in here…”


PCV, EGR, and other messy acronyms

As an aside, the positive crankcase ventilation (PCV) of a diesel engine is a little different than a gas one, when you combine it with exhaust gas recirculation (EGR). As the soot from the initial combustion is reintroduced back into the intake for a more complete burn and thus emissions reduction, the positive pressure from the sump is sending oily vapours back into the intake. Both of these things are effective in reducing harmful tailpipe emissions, but there is a downside. As the oil vapours reach the slightly cooler walls of the intake and intercooler, the misty oil vapours condense. The dry soot from the EGR suddenly has a perfect place to stick, and this process repeats over and over as the engine goes through its many combustion and exhaust cycles. Over time? Nasty build up. Tar-like in consistency, and about as easy to remove. 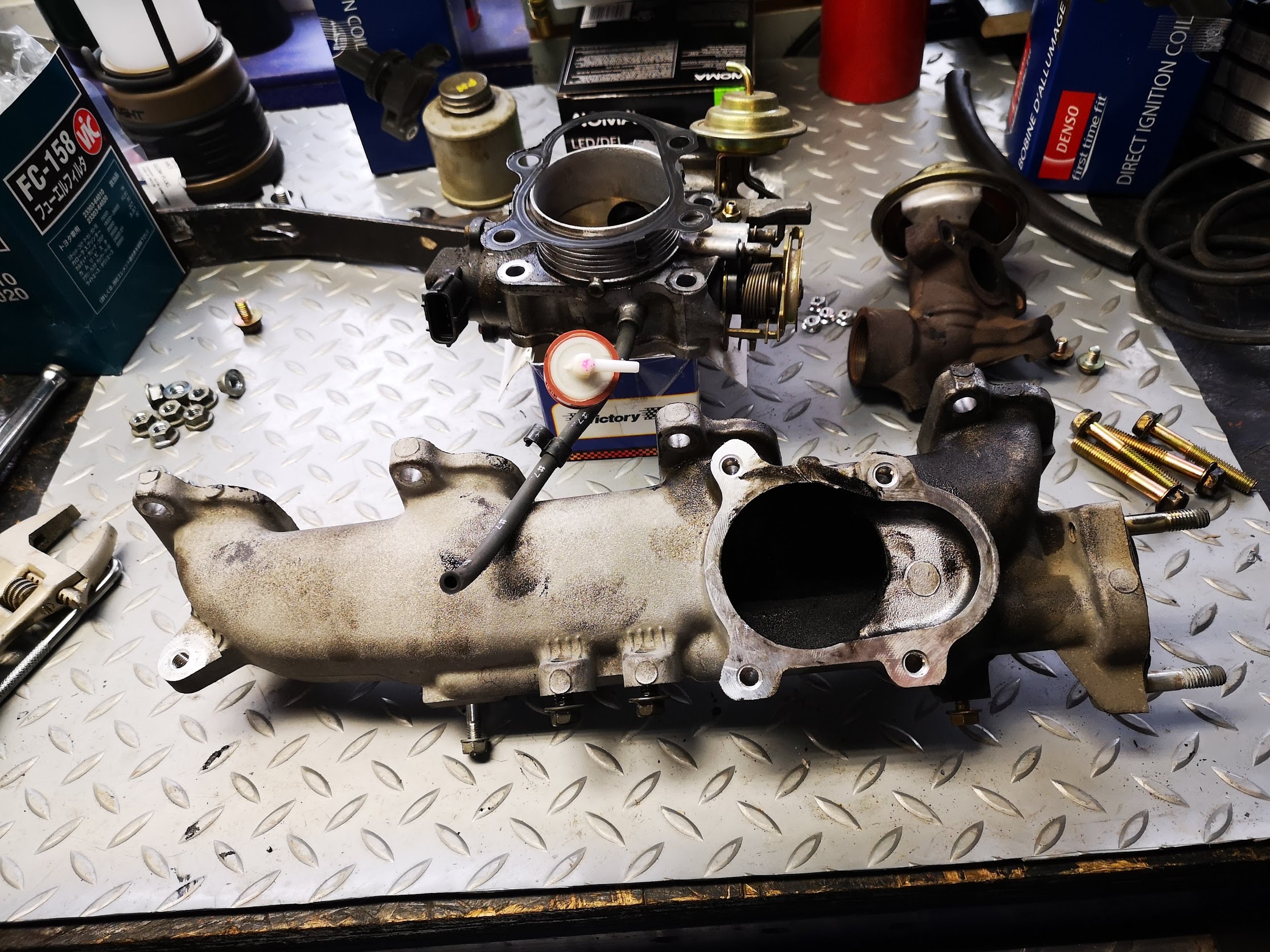 So back to my engine: 105 000 kms isn’t a lot, but it was enough to make the intake track look like the dino oil that Alberta is famous for. A quick peek down the throat of my throttle body was enough to convince me that while I had the intercooler off, maybe I should at least clean the buildup from the throttle blades? And if I was that far along, how much more difficult would it be to clean the intercooler too?

It turned out the carbon in the intake was even worse, by a large margin. At this point the glowplugs were looking like child’s play as I pulled the airbox, the throttle body, the fuel injector pipes, the EGR, and all associated vaccum lines and solenoids. All this was held captive with invisible bolts, unreachable nuts, and a pipe that required a 27mm stubby wrench (No, I don’t have one either). Never mind that none of this stuff had been cracked since 1999, when it was put together at the factory. 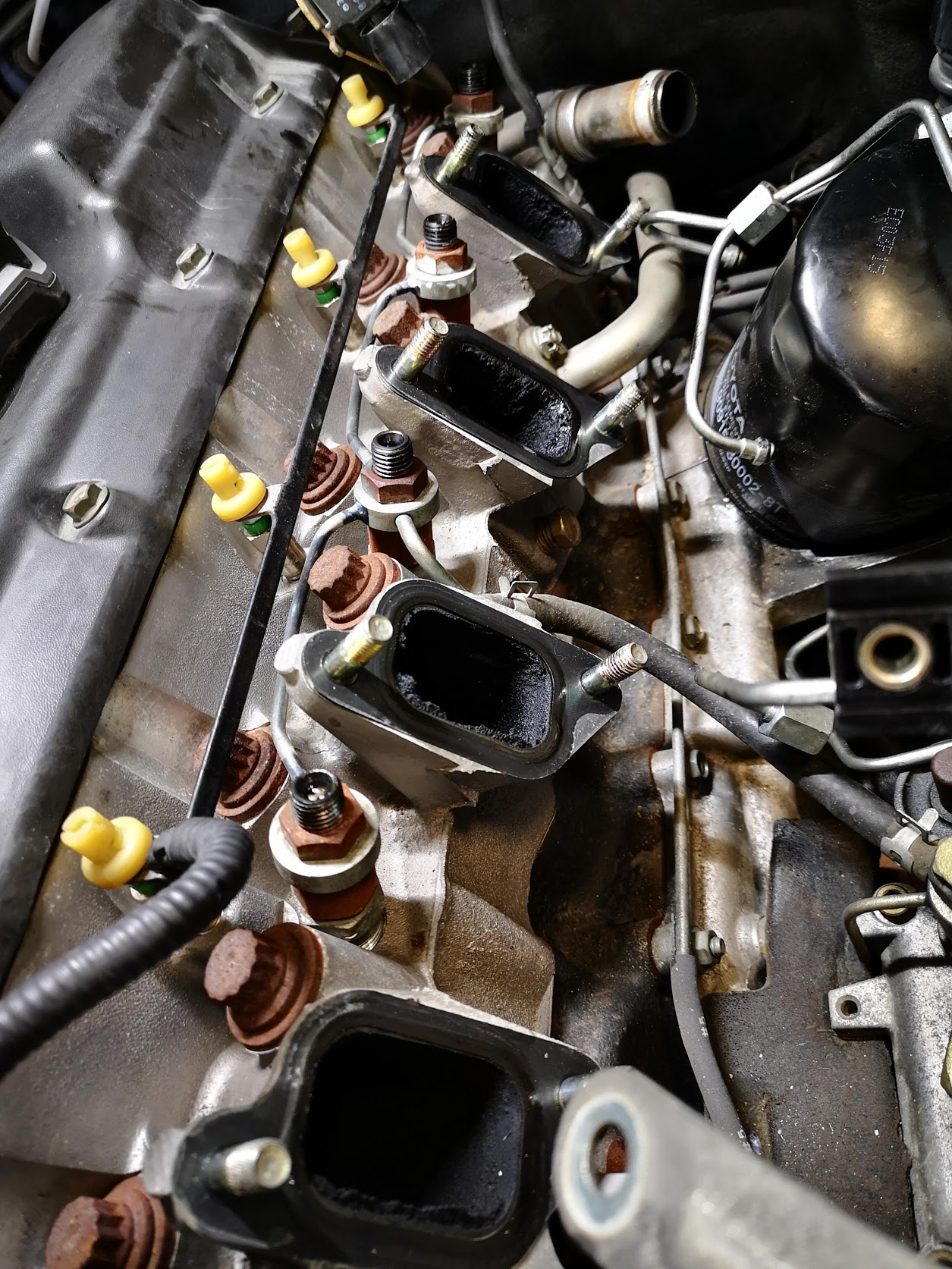 Once all this gear was out, and my intake was left soaking overnight in a spa of some Dark Water degreaser/oven cleaner soup, I found myself peering through what was left of the engine compartment, clear down to the starter.


Why would I zero in on the starter you ask? Well, on occasion, my starter would make a subtle electrical noise before turning over the engine. This had only happened a couple of times, but while I was in there…? Why not replace the copper contacts and ward off problems down the road? Turns out that the starter needed to be accessed through the wheel well, so before I knew it, I had a front wheel and an inner fender guard to add to the pile, and I was again going after mystical fasteners that could only be accessed with magnets and mirrors…
After banishing the last of the intake buildup, and replacing the contacts and plunger in the starter, I considered the arduous process of reassembling the whole mess. 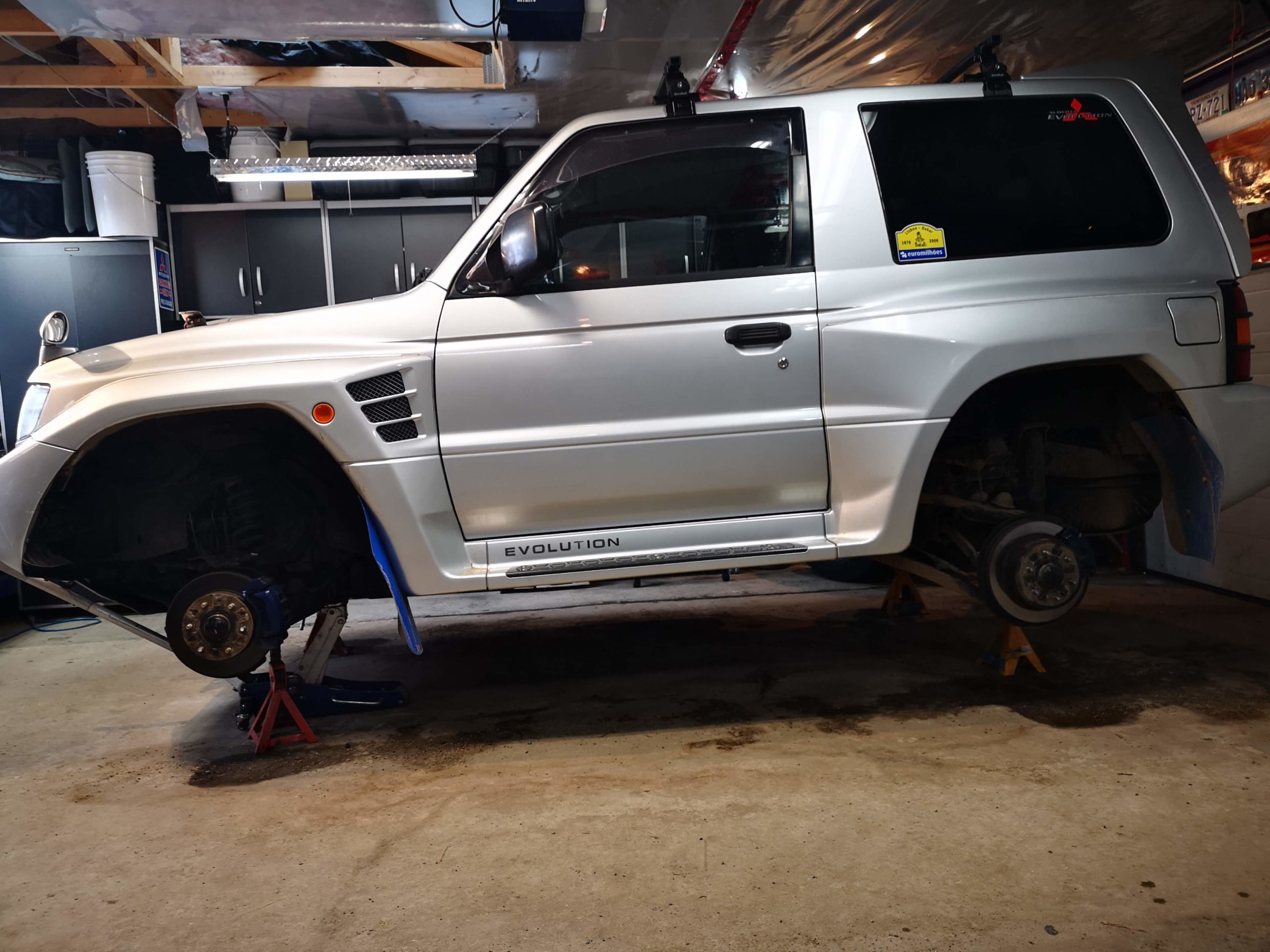 Which brings us to the here and now. Here I am – all ready to put everything back together. The Pajero Evolution is getting tires this week, so will be unavailable for my commute, thus I really should get the Prado back together. Hmmm. Speaking of tires, I already have one off to get to the starter. I wonder if I should go ahead and rotate the tires too, while I’m in there?
4WD challenge JDM Mitsubishi Pajero projects RHD Toyota 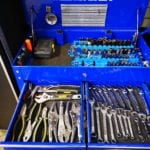 If you're gonna throw parts at it...? 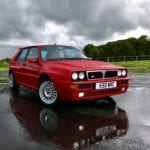