Spending Money to Save Money?

Or Do I have It All Bass-Ackwards? 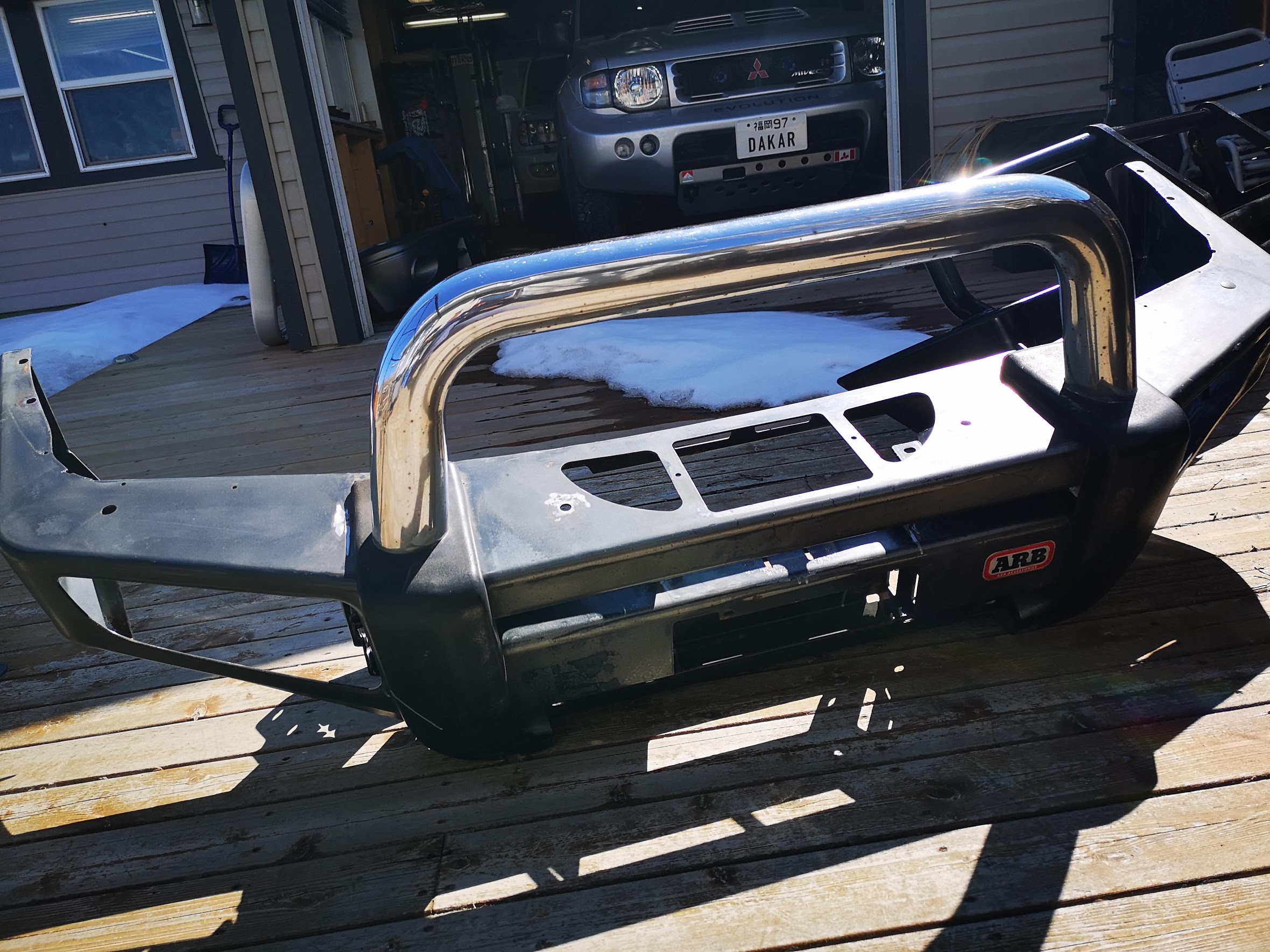 We all do it. Sometimes it’s a house project, but often times it’s a vehicular MOD. You buy the cheaper tires, or the less expensive bulb. You get the aftermarket tie-rod, or the non-OEM waterpump. Sometimes this works out just fine, and you’ve saved yourself a bundle. But sometimes? You end up getting what your gut tells you you should’ve just ponied up for in the first place.

That’s where I find myself this week. And it’s, as usual, related to a bumper. Now if you’ve been reading this page for a while, you might know that I’ve got a bit of a problem when it comes to bumpers. Okay, problem is maybe a strong word. Let’s call it a fascination? I’ve already written a story, a tale, if you will, of Two Bumpers. And that’s just the tip of the iceberg.

So it will come as no surprise that almost before I bought the latest JDM, a Land Cruiser Prado 90, back in November, I had somehow managed to find a bumper for it. Now full disclosure: in Canada, finding a quality winch bumper is not the easiest thing to do. Finding a bumper for a vehicle that was never sold here? Even harder. And finding a model specific, Sahara bumper, from ARB? Needle in proverbial haystack. So when I went out that night, cash in hand, to pick up my extraordinary find, driving my wife’s 100 Series (despite what I might say out loud, short wheelbase vehicles are made to carry 2 people, and maybe a couple of sandwiches) I may have had blinders on. Rose-colored glasses. Glass half full optimism. The guy had gotten it for his 4Runner, since it was pretty close to the right size, but had no mounts. After a dispute with a room mate, he ended up with a bumper, and no way to mount it. Undeterred, I offered him way less than asking price, but with a respectful yet reasonable a story of how much it would cost me to make it work. He liked my approach, liked my trucks (yes, I sent him pictures), and agreed to my low-ball offer, over the phone.

It Was a Dark and Stormy Night

When he dug it out of the snowbank that night, in his dark alley, I had a fair idea of what I was getting, and the tag matched with what I was expecting, so off I went. 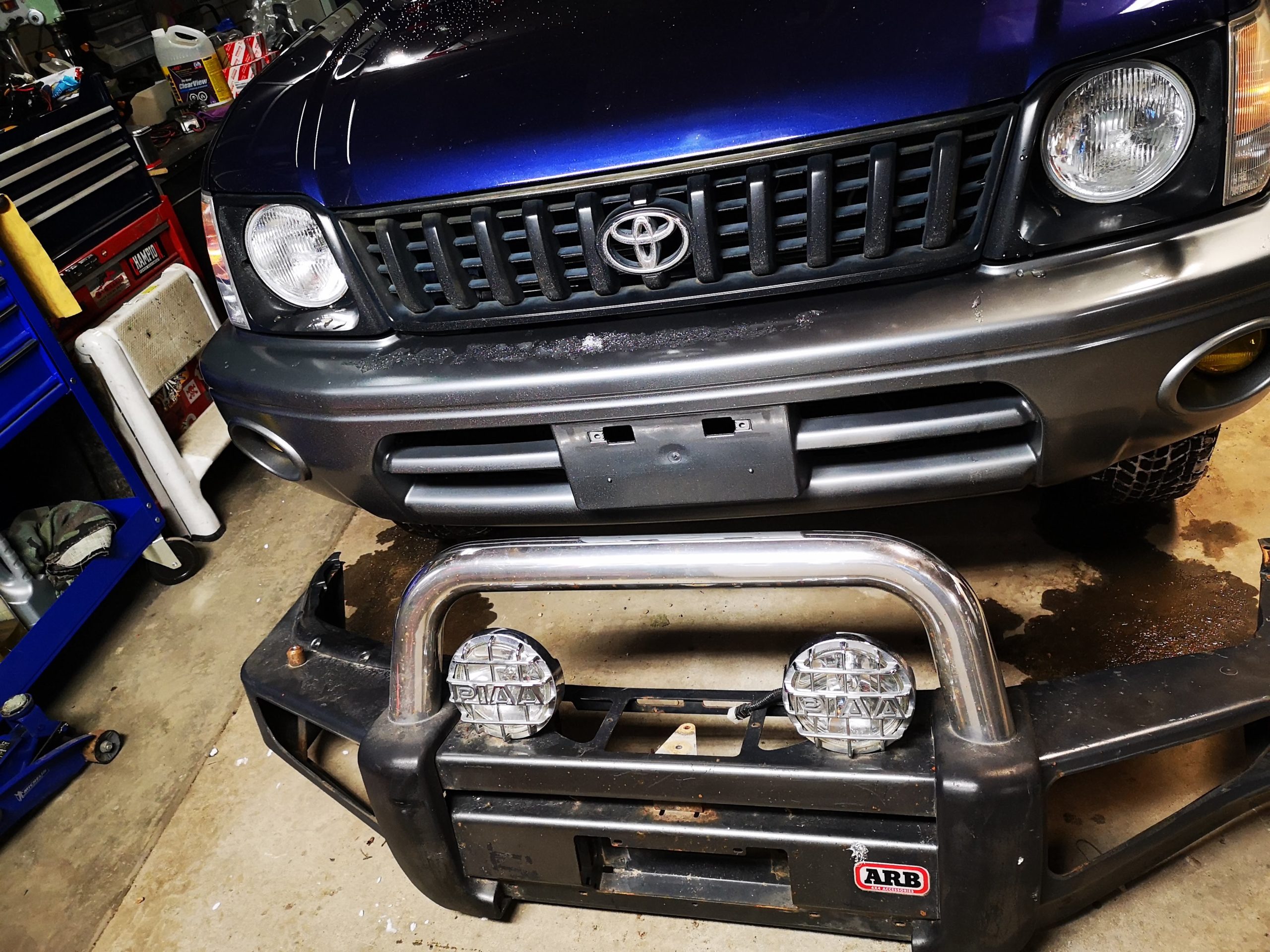 Fast forward to Spring. Here in Canada, it is finally heading toward decent weather, and I decided to begin the work necessary to bolt this thing on. I had previously called on some friends, and between several inquiries, connections, and relations, I finally had bumper mounts shipped to my front door, direct from ARB. (If you know the industry, you know this is no small feat, since ARB doesn’t sell these kind of parts to any layman off the street). I was excited get this bad boy hanging in place of my plastic stocker so a few weeks back, I unbolted it, and held the other one in place. Woohoo! Oh. Hold on. What’s this?


Dismount, or was it MISmount?

The brackets were ARB. They matched one of the numbers on the bumper. But they were clearly incorrect. Some closer CSI work revealed the mounts were for my truck, but the other end of them was expecting an ARB Deluxe model, not the Sahara model. This was ironic, since the Sahara is more deluxe than the normal bullbar, but not necessarily helpful. When I added shipping, taxes, duty, and US dollar exchange, I had paid more for the mounts than I had for the bumper. AND this was with an inside connection (which I really appreciated, don’t get me wrong! Otherwise, I can’t even imagine what they would’ve cost). Considering that the cost of shipping them back plus the paid duty would’ve been a dead loss, not to mention the questionable availability of the “Correct” mounts, I decided to try to make them work.

Call it the JDM disadvantage? If you are planning to walk into a store and buy aftermarket accessories off the wall, you should probably be driving something that was sold in this market. That’s not us, so we make allowances.

I had some scrap steel, and I set to work, fabbing something to make the brand new brackets mate my decrepit-looking bumper to my pristine Land Cruiser.


Okay, I left out a few details from the dark alley. First off, the thing was a little ummm, oxidized. All right fine. It had some rust. But at least the dent wasn’t THAT big. Huh? I didn’t mention that? Ooops. Must’ve forgotten. Yeah, there was a dent in the area of where the foglight buckets should’ve been. Good thing they were missing too. Right? 🙁 And there was also a spacer missing on one side, but that was immaterial because the one that WAS there was cracked. Are you starting to get the full picture?

And how much have I saved by getting this anchor? Hmmm. Well, we are partway through the “install”, so these are questions to answer in part 2. Suffice to say for now, sometimes you gotta spend money to save money. How close these two numbers come together other is an indication of what kind of “deal” you got. 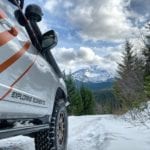 He just fell in love with E30s 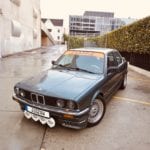