A JDM Journey where we actually drive the JDMs.

My friends sometimes call me an enabler. Near as I can tell, they mean it as a compliment, even though there is a certain amount of consternation in their tone. Wade’s nine year journey with his Delica says that I’ve enabled him to find a great adventure. Even if he won’t admit it out loud. 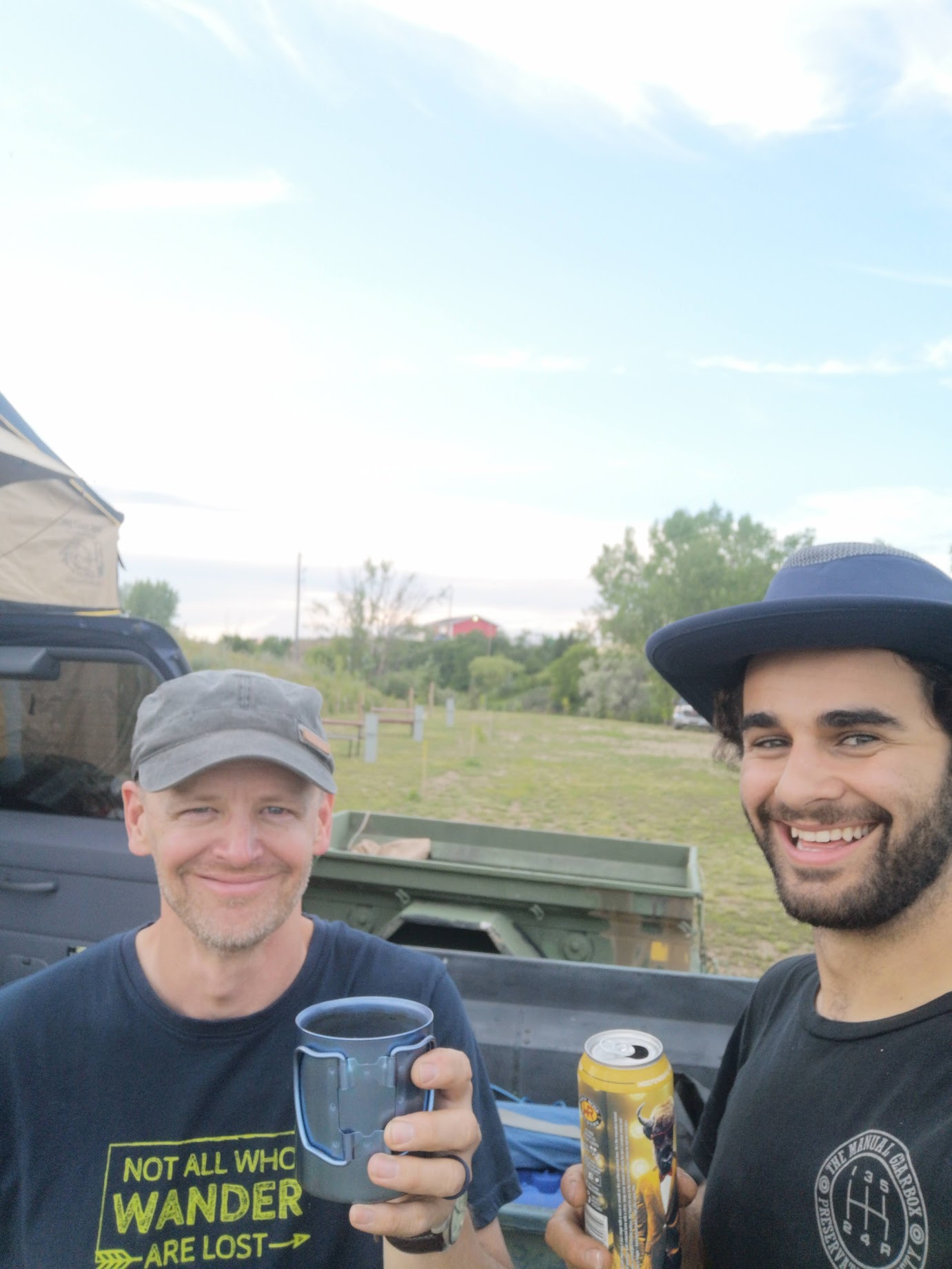 So it was probably no surprise to AJ when I sent him an ad for a second M101CDN2 trailer that I’d found. The fact that it happened to be on the way to get mine wasn’t lost on him either. Within an hour he had made a deal over the phone, and we were suddenly planning a trip across the country to get not one, but TWO Canadian Military trailers.

The distance was significant, and it was July of 2020, so the global pandemic still raged. This dictated caution and planning. We wanted to enjoy the drive. We also wanted to be safe. Ultimately, we set aside 5 days to go get the trailers, and return, with a minimum of social interaction on the way. The only public stops would be fuel. The day before we planned to leave was fraught with CB failure, rooftop tent mounting problems, saggy rear springs… all the things that don’t normally give you any issues. Sorting these took until late into the evening. And then the following morning the weather was windy and the rain was torrential. As we looked at our proposed route east, the conditions appeared even worse. Gusting winds were rocking the prairies, with a gale in Saskatchewan peaking at 139 kilometers per hour.

Discretion, valour and high COG vehicles, combined with potential tornadoes (possibly too far inland for Sharknadoes?) and hailstorms convinced us to wait. It would mean a longer travel day, but what’s a few extra hours in the saddle? 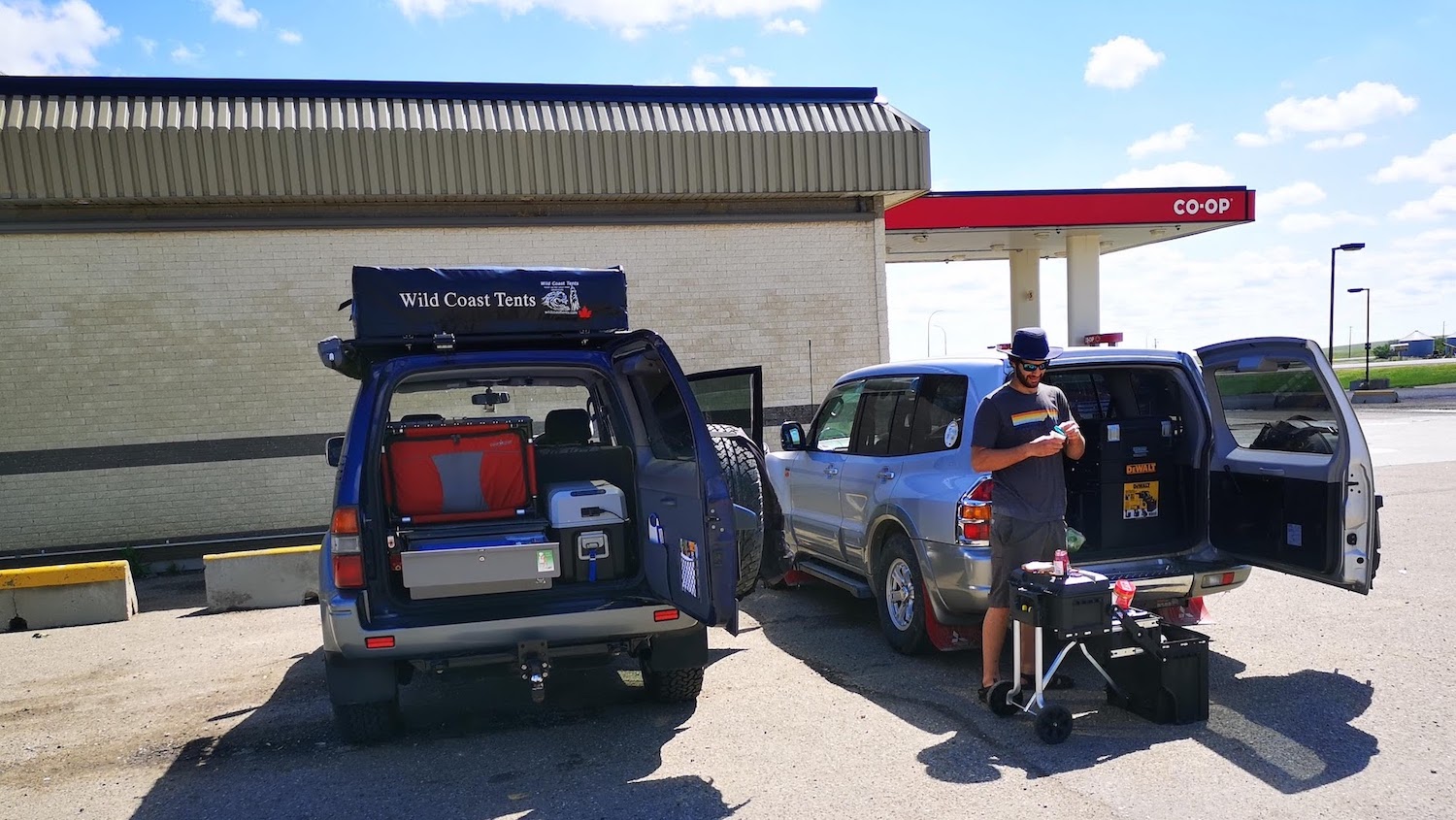 Wheels up! Or in this case… Down

Thursday arrived bright, sunny, and warm. Conditions were perfect, and we rolled out at 8 AM. We took a slightly northern route through some of Alberta’s Badlands, and crossed into Saskatchewan sometime after lunch. Construction didn’t seem to be affected by the pandemic, and we had some significant delays across the prairie, but by 7 PM we had reached our first stop (it was our plan B campsite, since the random one we had picked originally, had been gated off). It was a hidden gem of a site, with trees, bathrooms, and a SHOWER. Lovely.

Is it Friday Yet?

The next morning, we hit the road early once again. We needed to reach the border of Saskatchewan and Manitoba, drive most of the latter’s width to Winnipeg, pick up AJ’s trailer, certify it roadworthy, and then continue on into Ontario, hopefully before nightfall, to meet my Mighty M101CDN2. Around the time we hit our second construction delay, AJ heard from his seller. The warehouse where it was parked closed at 4:00.

We were not going to make it.

After some panicked back and forth, the seller agreed to park it outside the gates (AJ had already paid for it electronically), between some containers, where it would be safe for our arrival. Whew. The rest of the afternoon went smoothly: we located the industrial area on the NW side of Winnipeg around 4:45. And tucked away, just as the man had promised, was AJ’s little M101. Not as rusty as we feared, and about as cool as we had hoped. We did some fast tire changing (the original bias plies showed major cracking, even in pics, so AJ had brought two tires, already mounted). We checked the bearings, greased the pintle, and even wired up some temporary lights. Within 45 minutes we were primed for the next stop – ONTARIO.

I had forgotten to calculate the time zone losses as we headed east (two that day) and so my assurances to my seller of a 6:30 arrival morphed into 8:30 PM EDT by the time we rolled up to an innocent-looking dirt road off the highway. 2 minutes up a windy, treed approach brought me face to face with my new trailer! And (what would turn out to be) my new friends! 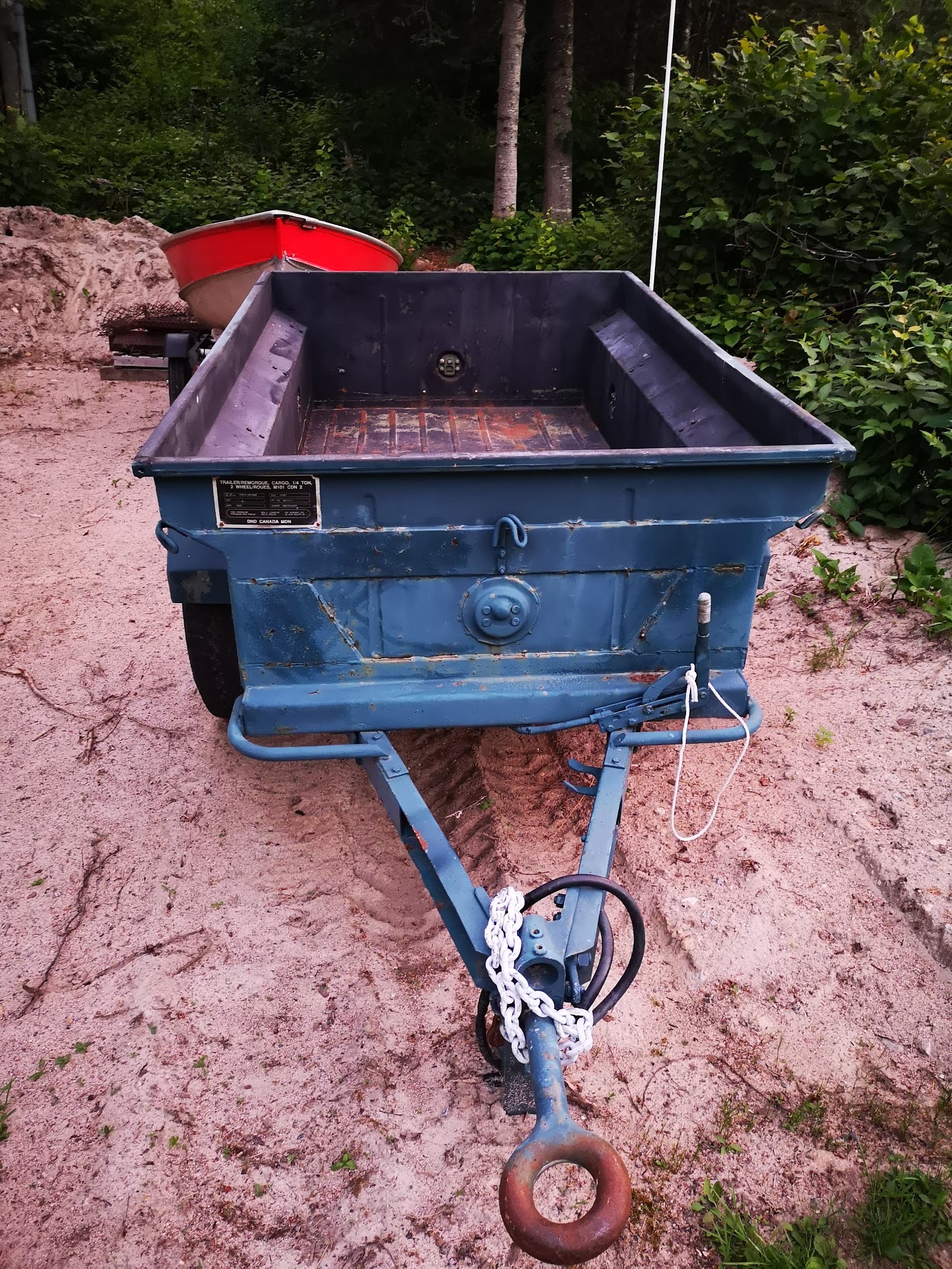 They welcomed us, showed us around, offered us refreshments, and then insisted we should stay on their property.
What a property it was!

“Would you like to setup camp down by the lake?” 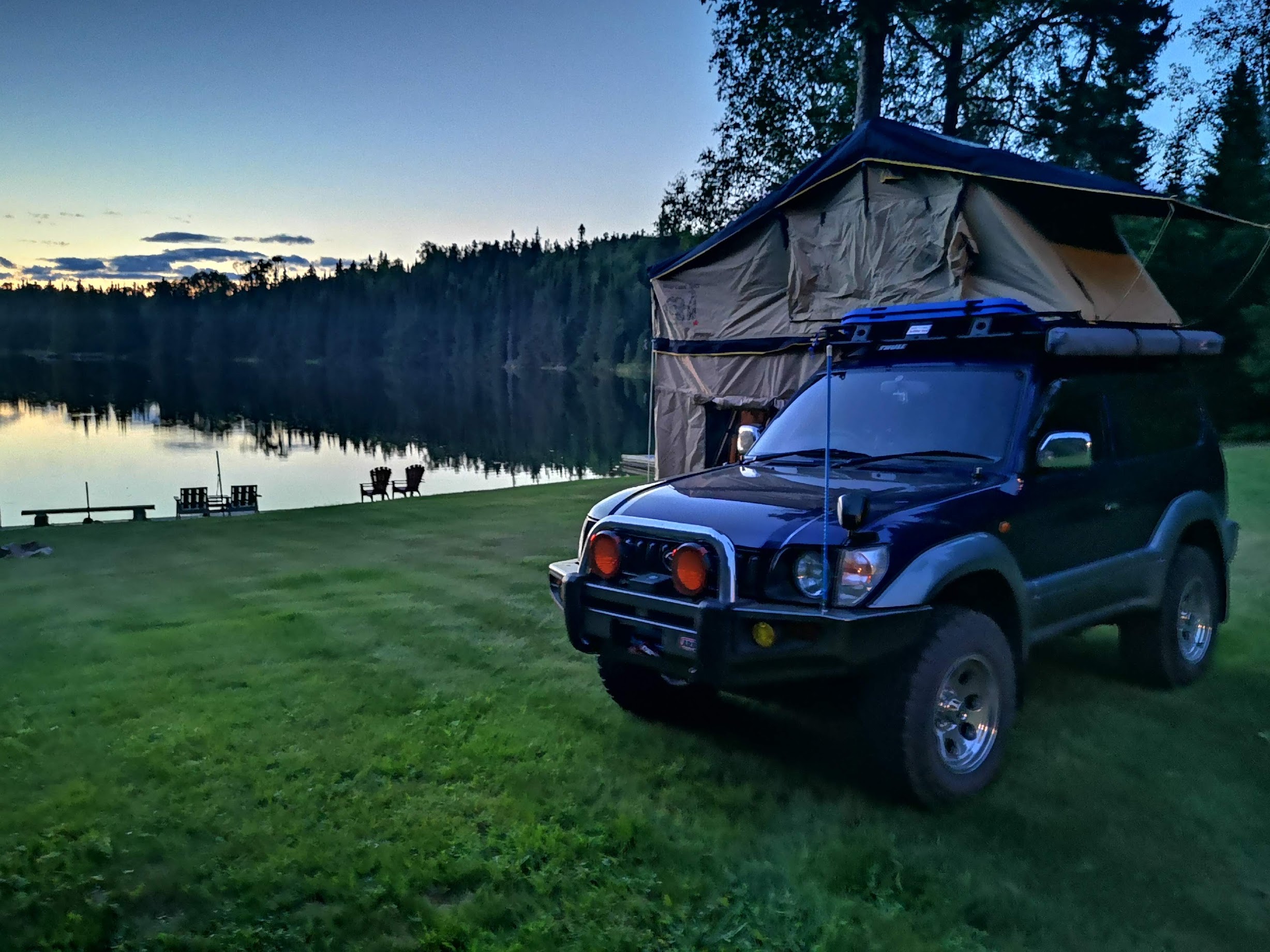 Umm. Yes please! After we set up, we were graciously invited up to the house for a BBQ. If all purchases went this smoothly, there would be lot less strife in the world. The following morning we debated our route, but ultimately decided to take our hosts up on their invitation to stay for another day. The subsequent hours were spent in good company, good food, and camaraderie, as we helped our host’s brother and his friends install a new trolling motor. We all told stories, listened to even more, and ended the evening with yet another barbecue, overlooking the lake at twilight.

Bright and early on Sunday we all said our goodbyes (over a large breakfast) and AJ and I turned west again, to bring our prizes home.

What about the trailers?

After all, they were the point of the trip…

The trailers are fabulous, but we knew they would be. I’ve already gone into them in all their awesomeness in Part 2. And they didn’t disappoint. I daresay you’ll be hearing more about them in subsequent stories. But the point of the trip ended up being the trip itself, and the people we met as a result. Our hosts were gracious people, friendly and hospitable, clearly, but hilarious, opinionated, worldly, and utterly cool. Our kinda folk.

It was a long drive. Around 3500 kilometers, round trip. There was a global pandemic. The weather was suspect. The trailers were old, and could’ve been piles of scrap. We could’ve just stayed home?

I’m glad we didn’t. The LandCruiser 90 and the Gen3 Pajero performed flawlessly. We ended up with amazing adventure trailers as a result, but even more important? We’ve got memories of an amazing adventure that will last a lifetime. 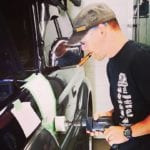 Gearhead 102: You can't always get what you want 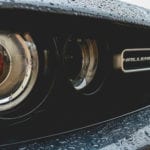