“Let me tell you something you already know. The world ain’t all sunshine and rainbows. It’s a very mean and nasty place and I don’t care how tough you are it will beat you to your knees and keep you there permanently if you let it. You, me, or nobody is gonna hit as hard as life. But it ain’t about how hard ya hit. It’s about how hard you can get hit and keep moving forward. How much you can take and keep moving forward. That’s how winning is done!” 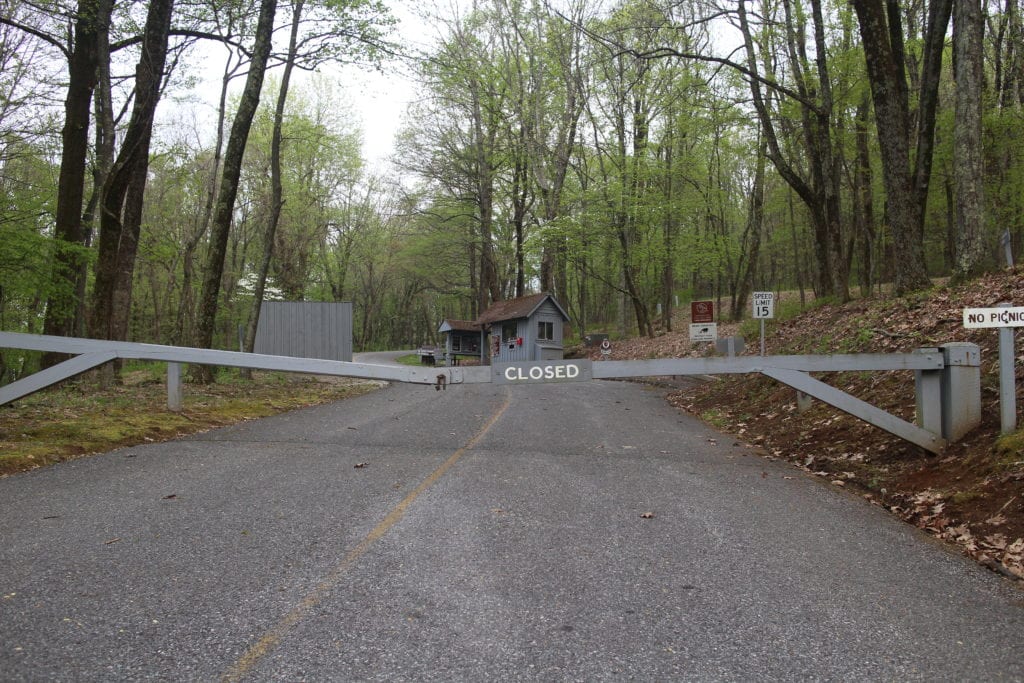 This kind of corner coaching was unfortunately not what was going through my head as I stared out the windshield, this rude plank stretched across our road. For a while there I didn’t know what to think. This was a put-you-on-your-knees kinda punch, right in the solar plexus. After the war of attrition we’d managed to survive today, this was an eleventh round knockdown, and as I sat there on my metaphorical knees trying to catch my breath it was all I could do to not stay down.

Today was supposed to be the opening day for the campground. I was sure of it. The website said so, and I checked and rechecked before setting off from home. Yet, regardless of what the internet told me, this gate said loud and clear, “We’re Closed!”

But then something appeared in my rearview mirror. 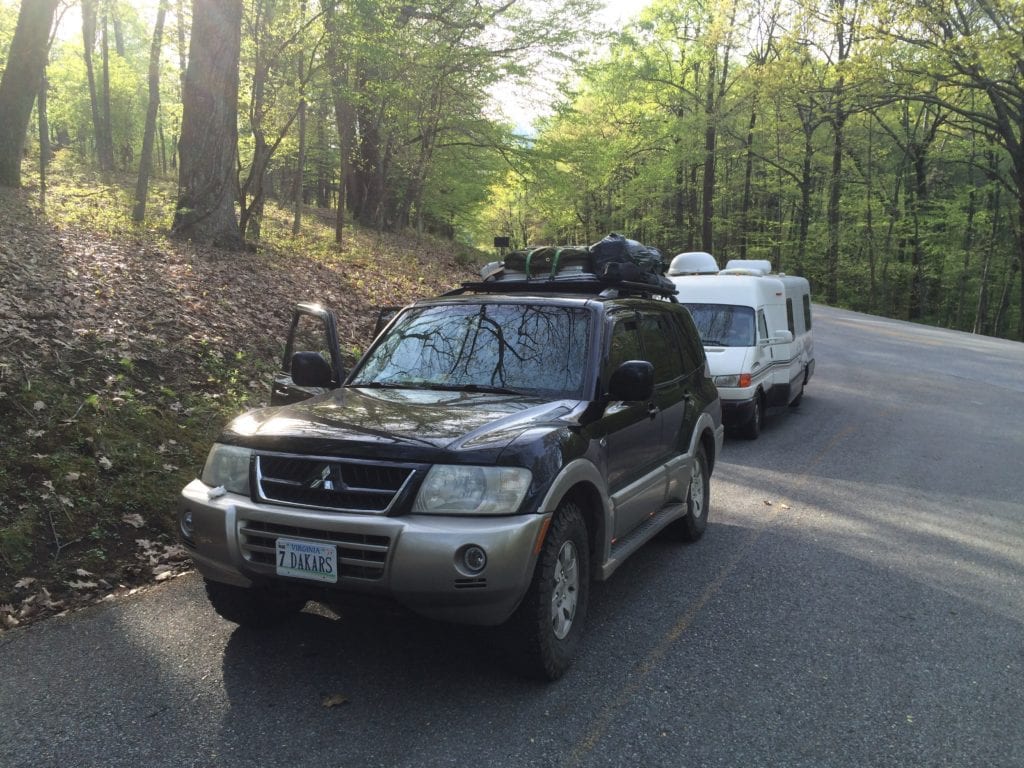 As I stepped out of the Montero the RV’s driver stuck his head out the window shouting, “Closed?! What do you mean they’re closed?!” Walking over and introducing myself I learned that this couple from up north had called ahead last week, being assured by the Ranger’s Office that the campground would indeed be open this weekend.

Finally I could take my first deep breath. I wasn’t an idiot after all, and though this was indeed some kind of mix up, at least it wasn’t mine. RV man and I proceeded to walk around a little, checking out the check-in office, the Park Service trucks, and the Keeper’s residence for any signs of recent activity or just somebody to tell us what was going on.

With daylight waning we needed to seriously consider what we were going to do for the night. I didn’t have a backup plan. But then I noticed something…fortunate. 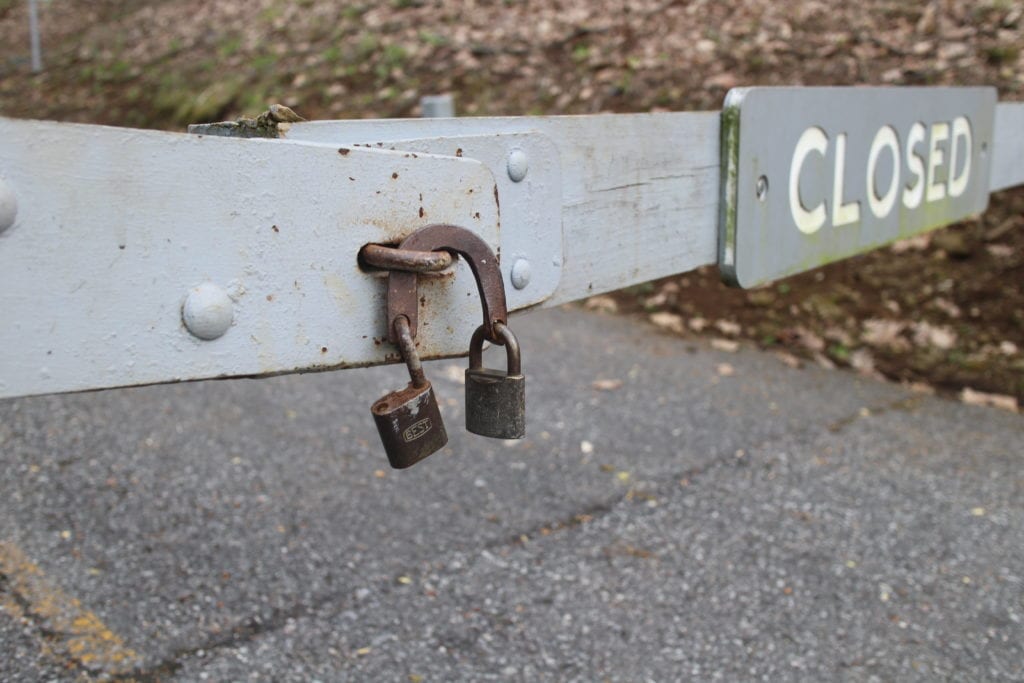 Upon closer inspection we found that the gate’s padlock wasn’t, well…locked. I looked at RV guy and he looked at me, both of us thinking the exact same thing. Hopping into our vehicles after swinging that gate open we proceeded to unofficially inaugurate that year’s camping season at the Peaks of Otter. “Seven! …Eight! …Nine!! And they’re up!” Rocky would have been proud.

I made good and sure to put my sixteen bucks in the office box, getting a picture of it just in case. Sorry to any Park Rangers reading this, but everything on our end was legit. With four hungry, sleepy kids on-board I wasn’t about to let your website snafu stop us. 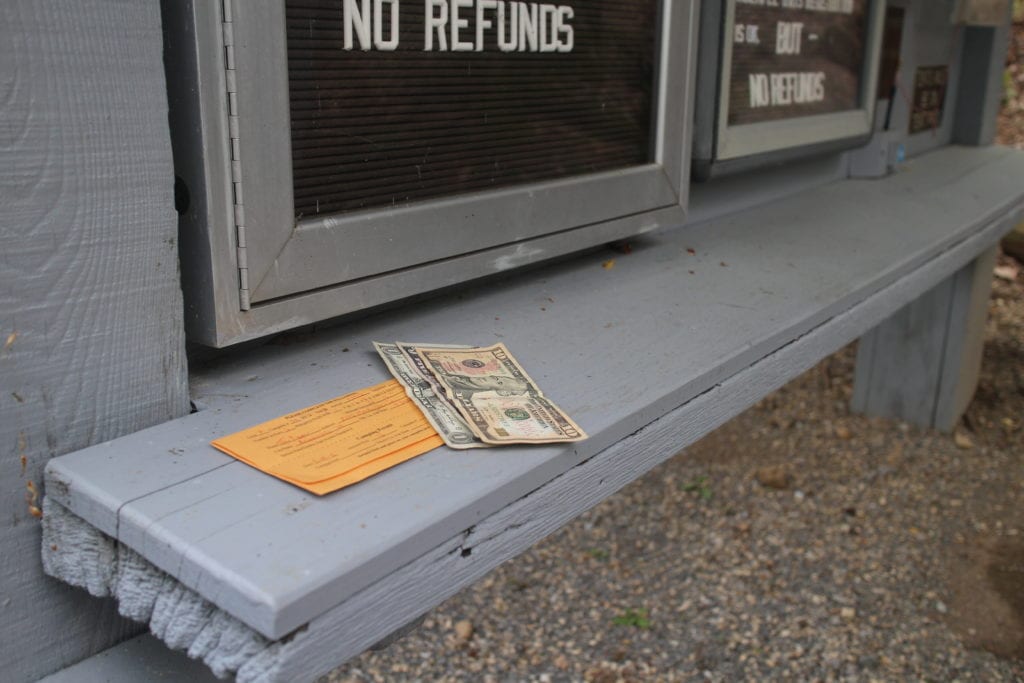 I can say with confident assurance that we were the campground’s first campers this year, and only campers in the tent section (the RV couple rode off to the camper loop, never to be seen again). 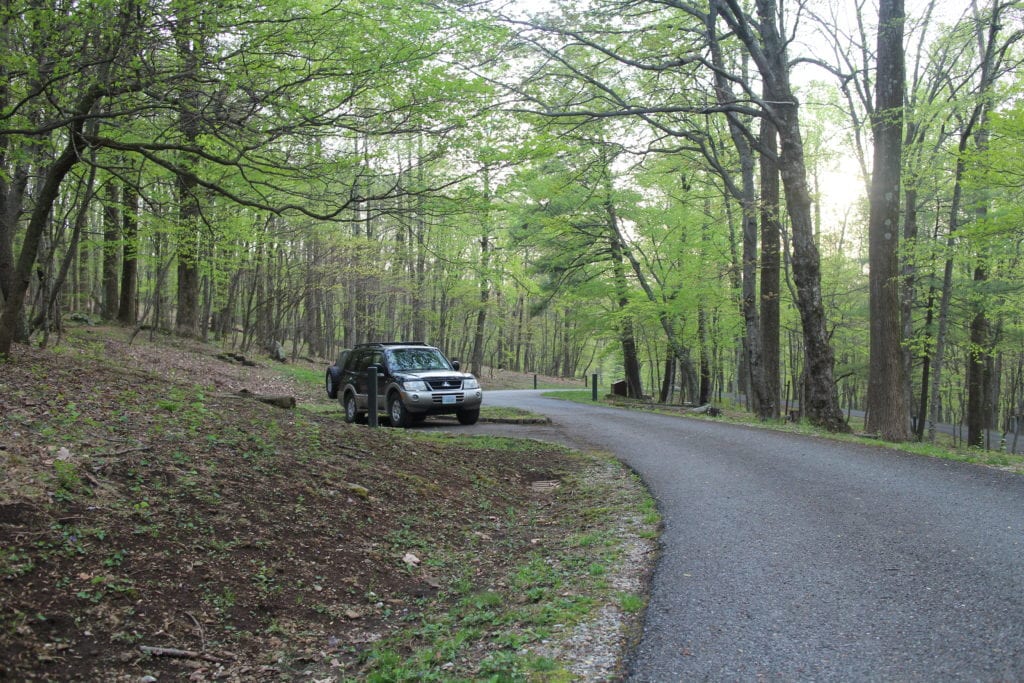 Another campground wonderfully all to ourselves. 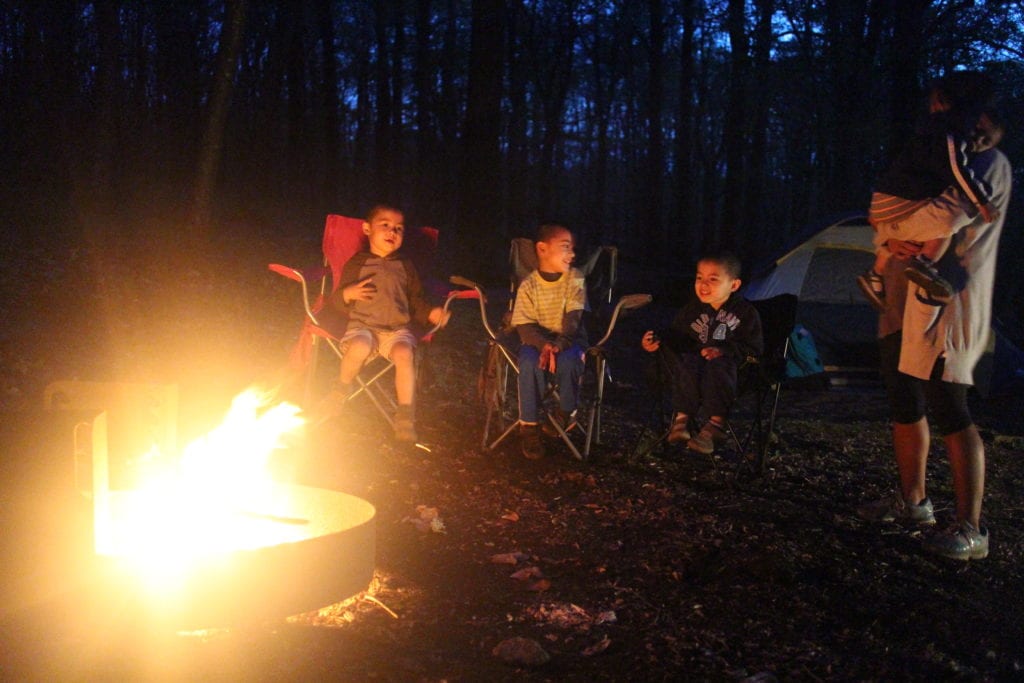 That evening would be our first dry evening of the trip, and we took the opportunity to make a campfire. That warm fire, like a hot shower after a long day of sweaty yardwork, lifted our spirits high after such a grueling round of battle. We’d need it. We were at the foot of the wizard’s mountain, and he’d be coming out this next round for the knock out. 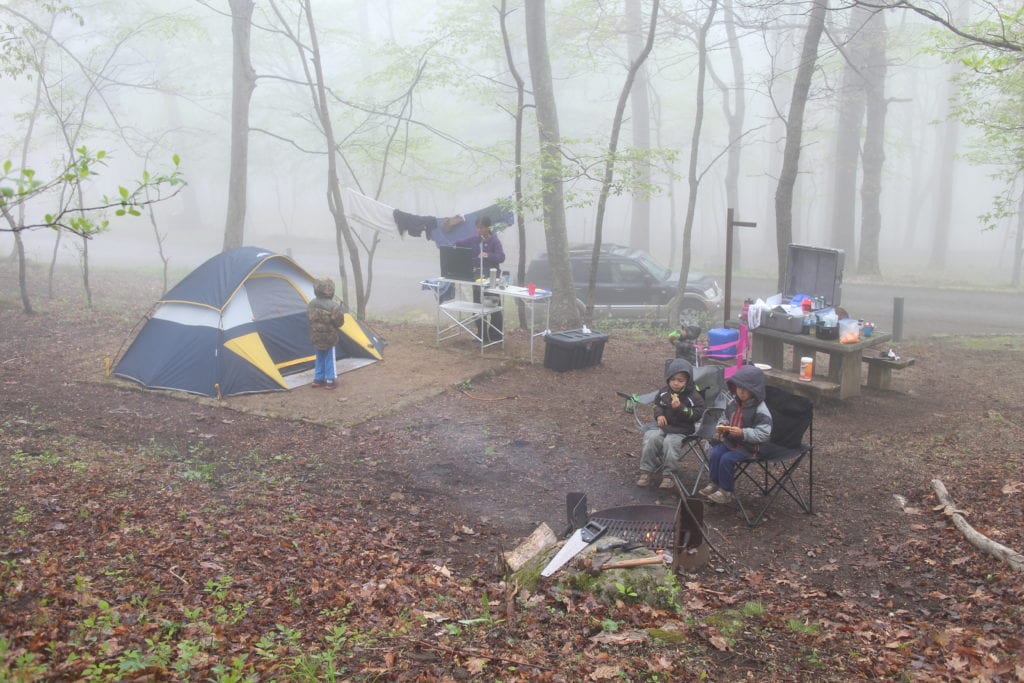 The last two mornings had been bright spots in our trip, but this one, owing probably to our proximity to our goal, was one of weather sent to war. Immediately there was a cold chill in the air, made more potent by the wetness all around. Thick fog and heavy tree top rain drops soaked us through our coats before breakfast.

The forest floor, owing to the week’s heavy rains, acted like a malicious bog, grabbing at our feet with sticky mud as we hiked around the campsite. There was something odd about this morning, and though the fog should have felt familiar by this point, there was a new and foreign element, something eerie in the air.

It wasn’t long before it struck, something that tore into three of my boys. That foul sorcerer had put a spell on them…a stomach spell.

Unlike the gate yesterday, the campground’s bathroom locks were very much locked. Thank God I brought a shovel, because for the better part of the morning I would dig what felt like twenty holes. We needed to break camp, if for no other reason than to find someplace with an open bathroom. A gift shop back on the Blue Ridge Parkway did the trick, where I noticed a very fitting piece of memorabilia for this morning… 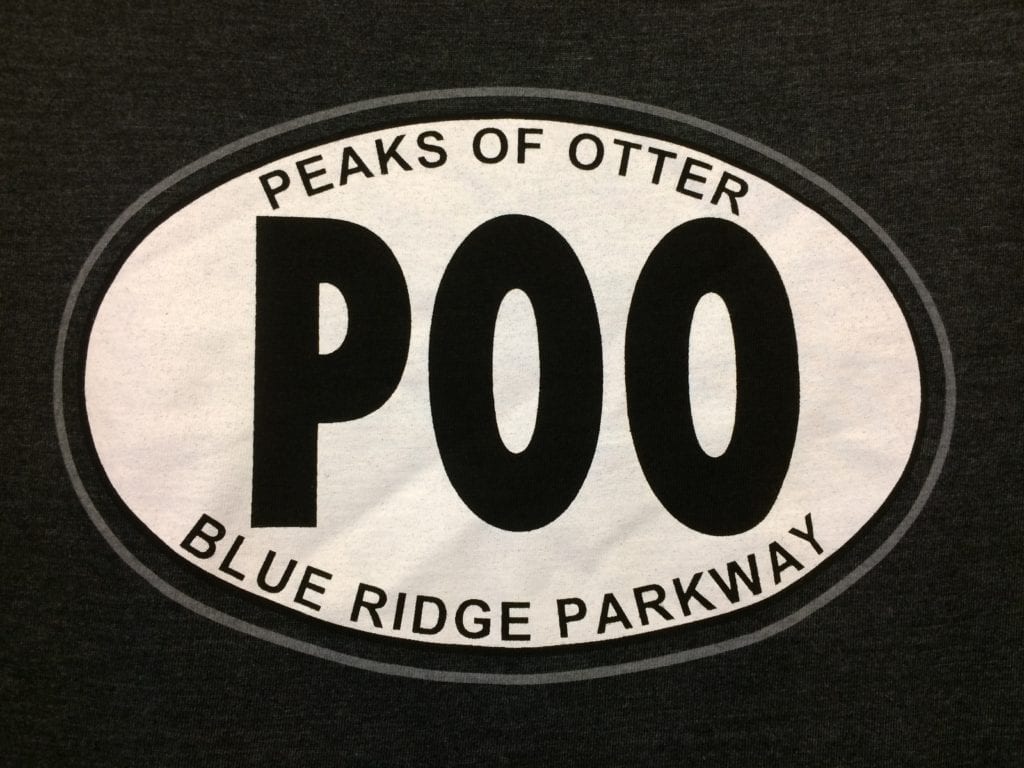 This was about the worst start we could ask for on a day that was meant to consist of visiting the Apple Orchard Falls in the morning and hiking to the summit of Sharp Top Mountain in the afternoon. This day was supposed to be our final push, the end of our adventure. It was supposed to be the end of the rings. Nothing for it I guessed, but to give it the old college try.

Attempting the first goal at the falls we found another layer of toppings for this crap sandwich day. Pulling the Montero into the parking lot at the trailhead for the Apple Orchard Falls, we found it overrun with what looked like escaped mental patients. Some kind of ultra marathon thingy was going on, utilizing the trail as part of the race route. There were crazy people everywhere, running! As if running by itself isn’t enough torture, these folks were doing it in the woods with the distance turned up to ELEVEN!

Fearful that these lunatics at large would try to eat my children or sack my anything-but-eco Montero we quickly reversed it out of there, thankfully not having to run over any of the masochists as we high-tailed it to freedom. Unfortunately ring number six stowed away with us…but at least it didn’t fall into the hands of these aimless nitwits. The plan to hike the falls had to be abandoned. 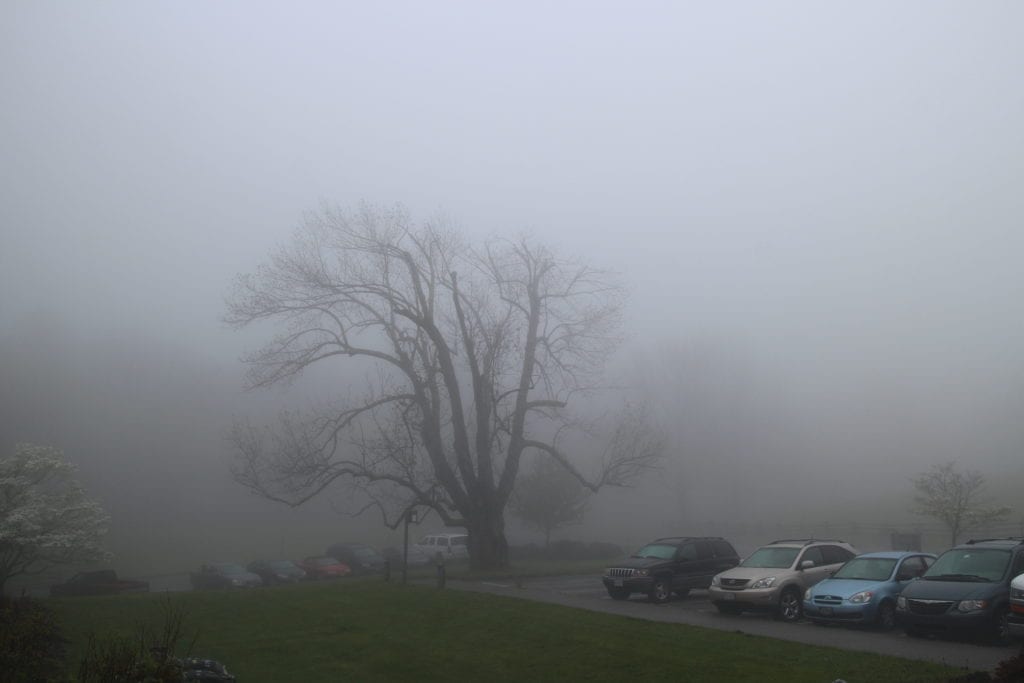 The prospects for the afternoon’s agenda were not looking all that hopeful either. This fog was stupid thick, and any attempt at mountaineering would make us just as crazy as the members of that emaciated running cult we’d just escaped.

The events of this day reminded me so much of this scene from The Fellowship of the Ring, the one where Gandalf is attempting to lead the Fellowship up over the icy mountain of Caradhas only to be resisted and rebuffed by the combined efforts of Saruman and the mountain itself. In our case it wasn’t blizzard conditions holding us back, but blanketing fog.

A sober assessment of our fellowship’s condition revealed the sorry state we were in. This was some of the thickest fog I’d ever seen, wrapping itself around everything. I talked the boys into seeing it as the breath of a wicked wyrm, working with the wizard to bar our path. Everything taken together we had a wounded vehicle, soggy supplies, three cases of diarrhea, devilish weather, and a possible case of trespassing on federal land. 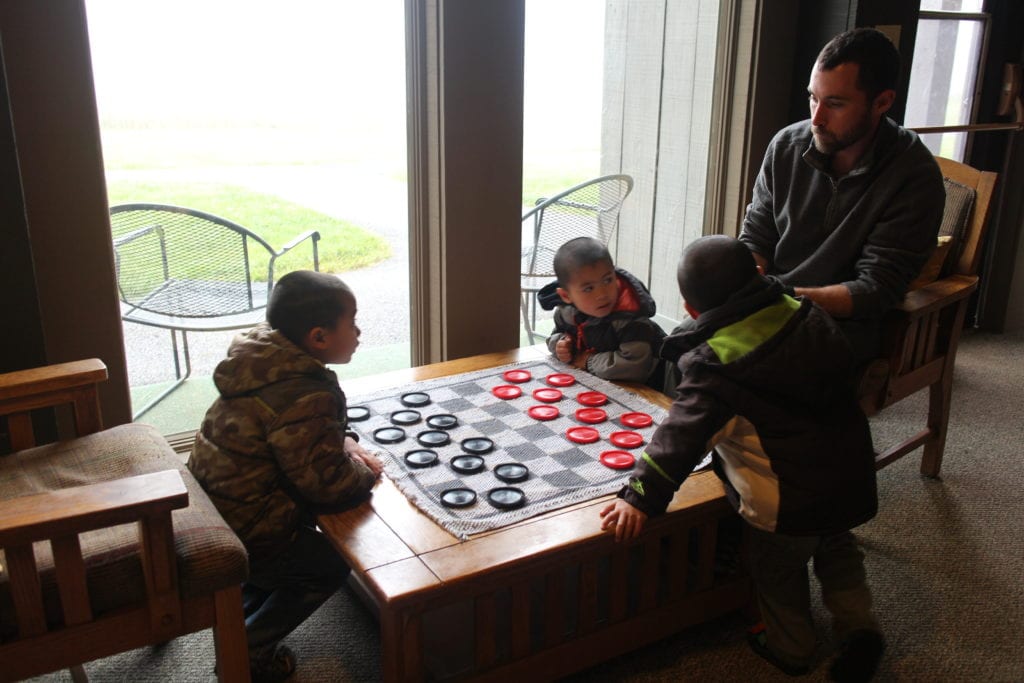 We spent some time in the Peaks of Otter Visitors Center, pondering what to do next when Boromir took me by the shoulders and shouted, “We must get off the mountain…We cannot stay here! It will be the death of the hobbits!!!” I couldn’t argue with him, but what would the alternative be? We were here to destroy these rings, and short of the apple-flavored gravity water and razor-edged, dragon breath-covered summits there was no other way to do that. What, were we just gonna let the wizard win!?

I tried to pull that “Let the Ring-bearer decide!” thing that Gandalf did in the movie. My wife, unimpressed by my veiled cowardice just replied, “Leaders lead, daddio.” I love my wife. At this point there was only one sane thing we could do…and Gandalf said it best.

So, after a hot meal in the visitors center restaurant (which was way overpriced) we set off for home. We had made a grand effort, giving it all that we had, but it just wasn’t enough with this attempt. Two rings remained, but for another day, another tale. We made our flight in the evening rain, pressing on through the darkness of night, arriving safely home just before midnight with all members of our fellowship safe and accounted for.

The Road Goes Ever On…

Roads go ever ever on
Under cloud and under star,
Yet feet that wandering have gone
Turn at last to home afar.

Eyes that fire and sword have seen
And horror in the halls of stone
Look at last on meadows green
And trees and hills they long have known.

This was a year of great ambitions for my family, of which this tale is just one piece. Those questions, Are they too young? Are they too many?, are ones we’ll always have to ask. But this trip has served to teach us that answers aren’t found in the asking, but in the doing…in the finding out. Want to know what we’re capable of, what our family is made of, the limits of our abilities? Then let’s go! Let’s find them out. The world will not wait for us behind our hedgerow of excuses, nor will our children.

Missed opportunities are the only way to fail on these paths.

Hopefully our maniacal trip has been a good lesson in that for anyone patient enough to have read along thus far. Just think of what would have happened differently if I’d never grabbed that roll of painter’s tape and set us off out the door into the unknown world of Middle-earth. As Bilbo says, “It’s a dangerous business, Frodo, going out your door. You step onto the road, and if you don’t keep your feet, there’s no knowing where you might be swept off to.” But we did set off, and just look at all that happened as a result…

Godspeed everyone, and happy adventuring!

In the meantime, “I have some things that I must see to…Questions. Questions that need answering!…Keep it secret. Keep it safe.” More to come… 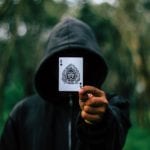 Get Personal. Drop the A.

The MAP to Absolute Pressure 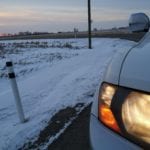