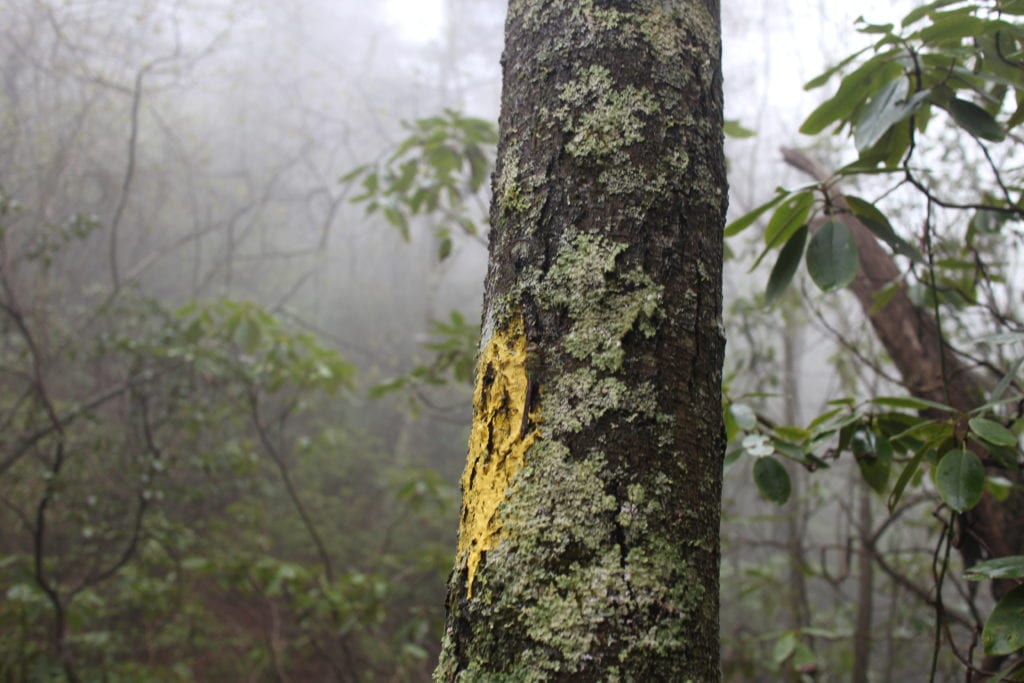 I’ve always had this weird thing with my eyes. It’s hard to explain, but it isn’t really anything wrong with seeing (I don’t wear or need glasses at this stage of life). I see just fine, but looking at things, looking for things, that’s when it shows up.

“Did you see that groundhog?”

When I was a kid on road trips with my dad I had to always have my eyes looking out the windows because I’d get carsick. Still, I’d always be the last to see stuff. Deer, turkeys, road signs…sometimes I’d get lucky and happen across it before we passed by, but more often than not…missed it. “Uh, yeah dad…cool.”

You know that saying, “Missing the forest for the trees”? It’s like a literal, physiological case of that. “Little John, DEER!” I heard in a whispering tone. “Huh, where? Uh, oh…is it a buck…” By the time I’d found the creature in my vision my dad had already dropped it dead in its tracks. Perfect shot, but we both knew it was supposed to have been mine.

“You’ve got to pay attention son.”

But I was…frantically scanning one tree at a time. It’s like my default viewing mode is zoomed in to street level rather than a state-wide panoramic. I prefer to see things one at a time rather than all at once, and while that can be great at times it can often be frustrating…or very funny depending on the situation.

That Lego Movie scene where he’s watching the show Where Are My Pants?…yeah, that’s like real life in my home. “Did you look downstairs?” my wife asks. Of course I looked downstairs woman! Twice! Thinking that I say this, “Yes dear. They’re not there.” Knowing me, loving me, she proceeds to walk downstairs where she sees the pants laying in the middle of the floor. I love my wife. She’s already showing she’s ride or die for the day when my dementia sets in. 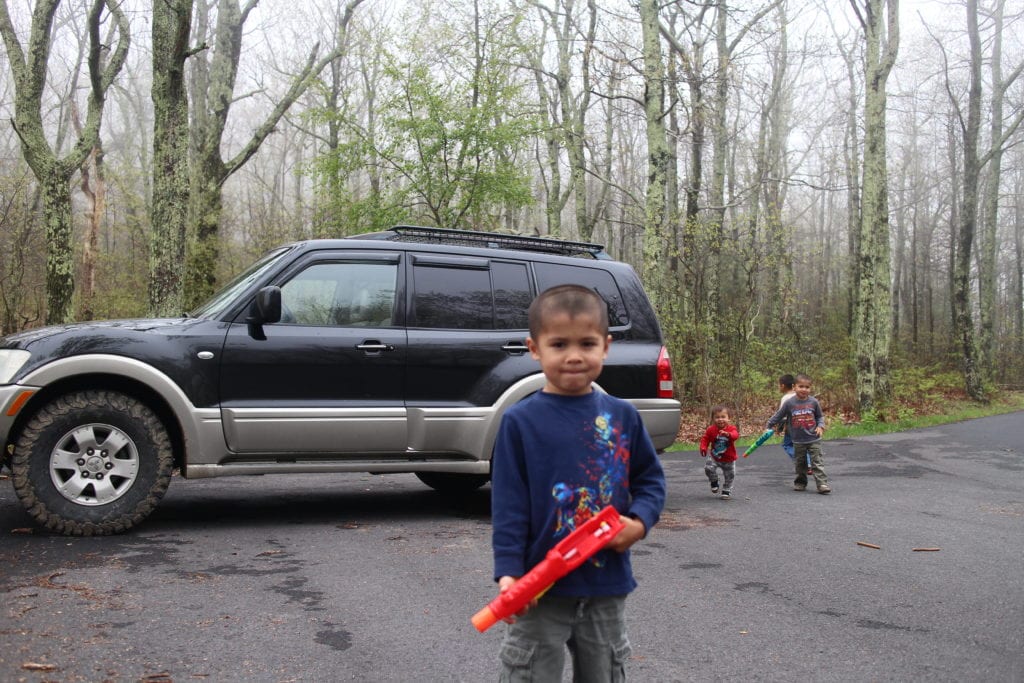 The Bald Mountain Jeep Trail spits you out onto the Blue Ridge Parkway right after mile marker 22, and from there it was a short trip to our predetermined lunch spot. I’m sure the Slacks Overlook is for fine viewing most days, but we couldn’t see much in the fog, plus we weren’t there for the view anyways. Ring number two was bound for destruction in the White Rocks Falls just south around the Twenty Minute Cliff.

Finding our trailhead took a little advanced planning. As we set off south down the Parkway, on foot no less, my wife asked, “Where are we going now?” Honestly I didn’t really know, having only read about this place on the internet, where they rightly warned that there were no signs marking the way. “We’ll just have to keep our eyes peeled,” I replied with a coy expression on my face. 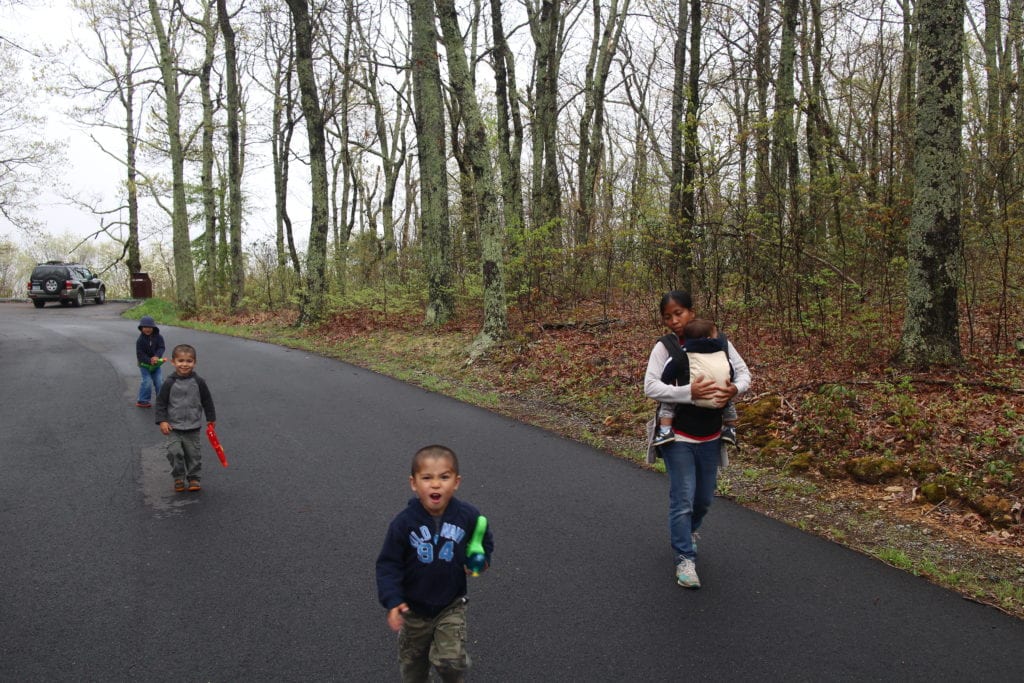 This saying is something we say a lot with our boys. On road trips I’ll specifically ask them to call out when they see anything noteworthy, be it a cool car (they LOVE cars), an animal, the lawman after daddy’s money, whatever. Inevitably one will excitedly point out some discovery only for another to miss it. Whining ensues. Whining always ensues, as if I or mom had the ability to pause or rewind things long enough for everyone to see what’s going on. Life doesn’t work like that. That’s why we always respond, “You’ve gotta keep your eyes peeled.” 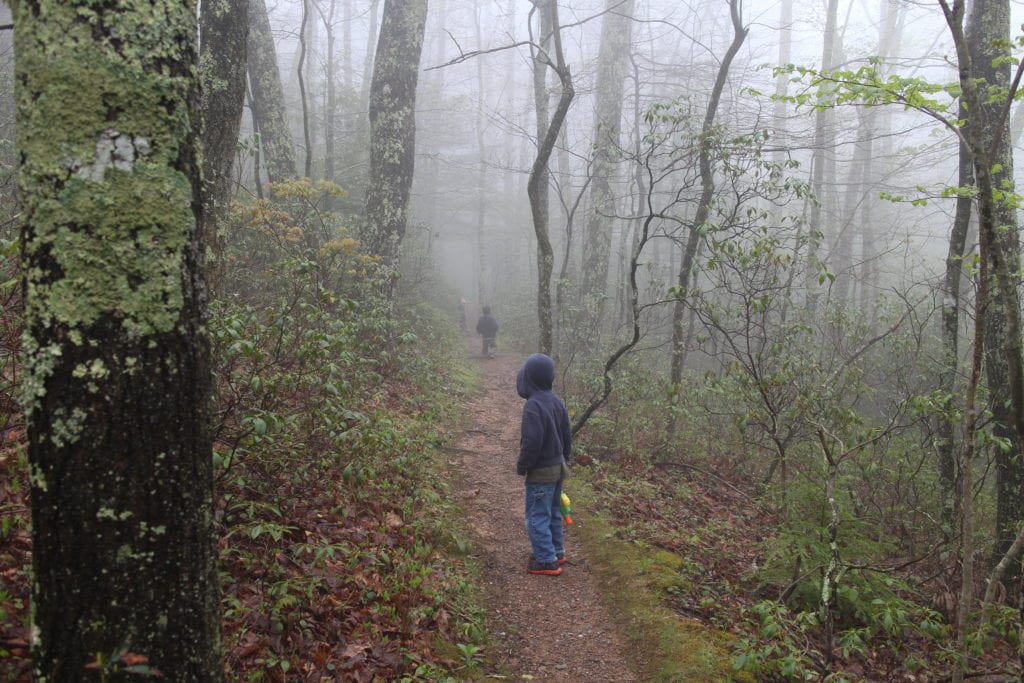 And finding these White Rock Falls would require everyone to do just that. I didn’t exactly know where or what to look for, but did notice yellow trail marks periodically that I gave the boys the task of pointing out. Only problem was I didn’t know what the yellow blazes were for. Next thing we noticed was an X carved into a tree. Not knowing what that was for either we just kinda kept bumbling down the path.

Visibility was getting worse and worse as thicker precipitation rolled in. The fog turned into a thick, lazy drizzle, the kind that hangs around waiting for you to walk into it rather than making the effort to fall down onto your head itself. There was an addling aura in the air as we stumbled along. If you don’t know where you’re going, does that mean you’re lost? Maybe we just hadn’t found our way yet was all.

As our road began climbing I suspected something amiss, as water tends to flow opposite our trajectory. My suspicions were shortly confirmed as we found ourselves looking over the edge of a cliff. This was not our road. 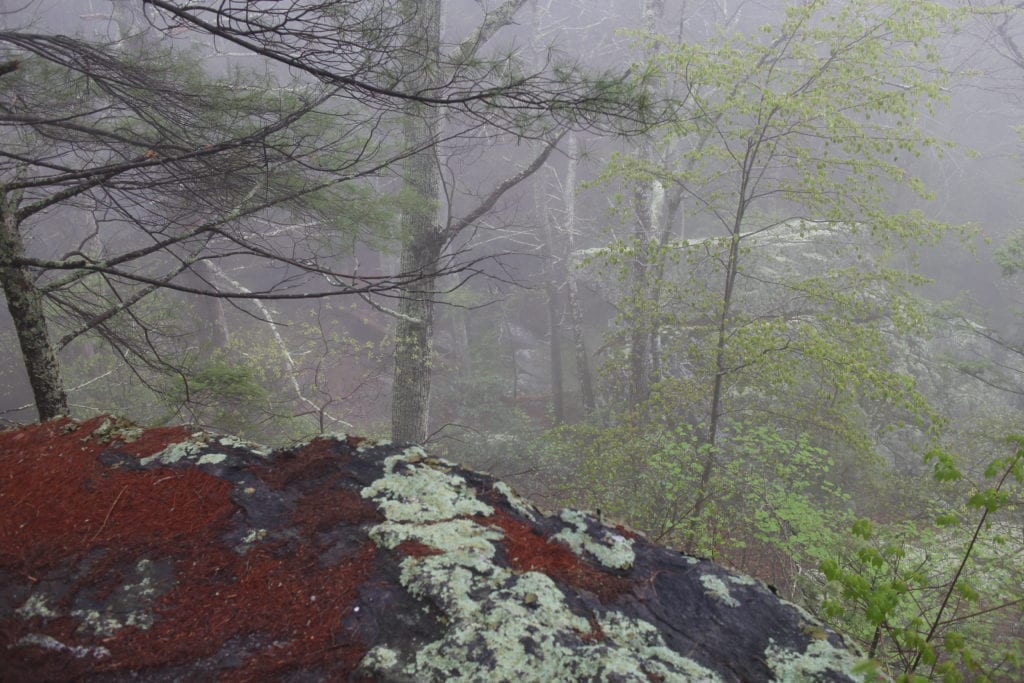 Not comfortable herding cats on the edge of who knows how high a drop I turned our crew around. We’d have to go at this another way. Keeping our eyes peeled wasn’t really working with this fog only opening up about twenty-five feet of viewing area in any given direction.

My default way of seeing the world was now the only way to see these woods. There would be no zooming out to gather the bigger picture, to gather our bearings. Honestly reminded me of Bilbo and the dwarves wandering aimlessly through Mirkwood, drunk off the magical air. That’d be us too, if not for ears. Thank God for ears.

Water does this strange thing when it flows down a hill called “making noise.” I don’t know who first noticed the sound, but somebody had the wits to follow it. Before long we were back at the carved X where my wife and son Rapha noticed a hidden spur trail venturing off to the source of the sounds. 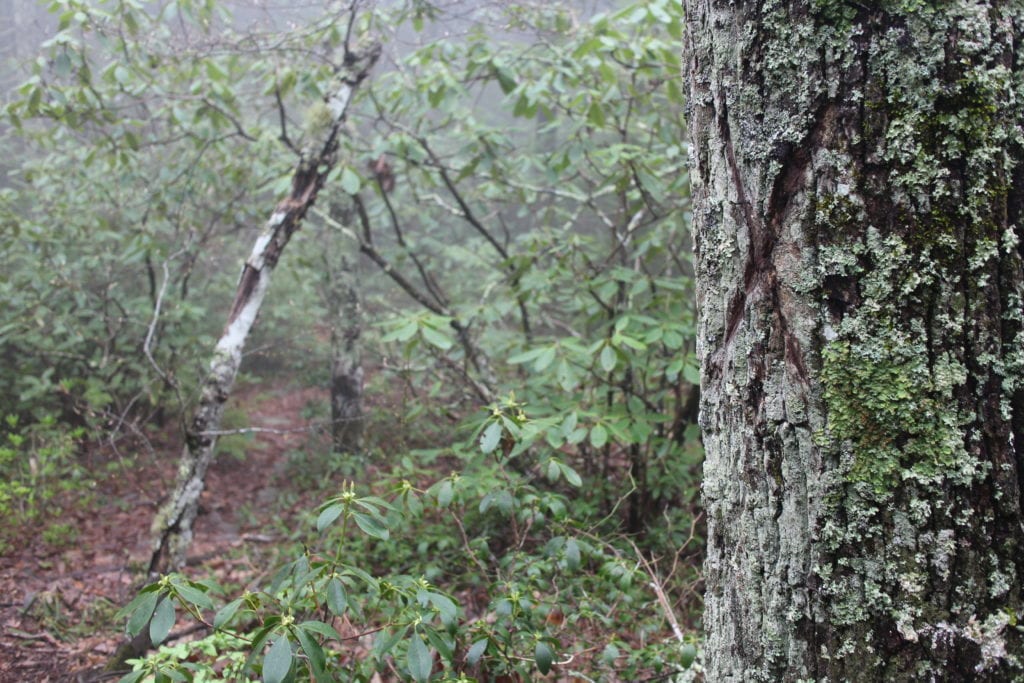 Following that, under rhododendron branches, over oak logs, we eventaully came to a small series of falls. Regardless of which falls these actually were we were resolved that they were in fact waterfalls and therefore fit for ring ruining. Ring number two, adieu.

The walk out was a merry one, despite everyone being tired and drenched. With all the days’ accomplishments we were quite proud of ourselves. Judging by the fog we guessed the wizard was pissed, but no matter. Sleep and sticker books awaited us back at camp, and the road to get there (SR687, North Fork Rd.) would be the most beautiful of the whole trip (I highly recommend the dirt drive for the beautiful sights).

A Proper Perspective for Adventuring

“How could you not see your pants laying in the middle of the floor?” she struggles to ask through her gasping-style laughter, eyes closed, head back. It’s a laugh we’ve shared dozens of times at this point in our marriage, and I’m sure we’ll have more. She sees the whole room at once, I’m focused in on the texture of the couch pillows, everything else a background blur I guess.

“You’ve got to pay attention son”, dad says…and I do, but I guess I just put all my attention chips down on one number at a time as life’s roulette wheel spins in front of me. Sometimes that’ll mean bigger paydays, but it also means I miss a lot. I’m thankful that God’s improved my odds by giving me my wife and kids (and hopefully some adventure-minded friends in the future) for there’s just so much to see, enjoy, and do out there.

Too much for just one person, one set of eyes, one perspective. Or even just one visit.

I know folks who have been everywhere, done everything, but whose lesson from it all is something akin to having visited all the vast, wide oceans only to so much as dip your toe in. On the other side of the coin there are those that could tell you about every wrinkle, rock, and recipe ingredient from their home town, while the whole wide world is ablur outside of their vantage.

Neither does this masterpiece justice, and our hearts know it. I think it’s a part of what wanderlust really is, that tension between wanting both to see it all, but also know it. Deeply know it, like a man and wife sixty-five years into marriage…even if one of them has dementia and can’t find his pants.

We who want to be adventurers need to see wide, but also deep, yet the reality is that God’s put eternity into our hearts. It’s too big, too deep for any one person and any one lifetime. It’s meant to be shared because the proper perspective for adventuring will be different for each person in each place. Some will see the yellow mark and where to go, while others, like my son Rapha, will see the dragonfly and what’s here now. 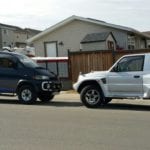 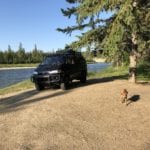