Rose with the sun, strangely rested on less than six hours’ sleep. We’d stayed up until the wee hours, trading stories and drinks around the campfire, resulting in a very mild hangover. Nothing breakfast couldn’t solve.

Half a dozen of us left camp en route to Overland Expo West (OXW). 10 miles of bumpy, but pedestrian forest road between us and tarmac, a mere seven miles south of the venue. Plenty of mud for those who wanted to dress up (I did).

Parked on-site with Todd. Still meant a good, quarter-mile walk from the trucks. Someone mentioned a purple gate, saw two or three, none were close. Just went with the flow of people walking onto the property.

The Plan: Do a lap of the venue, note interesting people and remarkable products, go back and dive deeper. Worked at OXW17 on Mormon Lake. Why wouldn’t it work at OXW19 at Fort Tuthill County Park?

Overland Expo West has grown into something of a juggernaut. Like walking into a massive bazaar in some far away place they don’t mention in the history books with a name you can never spell right.

Felt like foreign explorers in a strange, new land. Two quick detours from the main drag, we’d lost all sense of direction and purpose. Storytellers in search of new stories, swimming in a sea of the same old stories. The more things change, the more they stay the same.

Surrounded by eye candy. Everything was so done-up. Almost impossible to either spot what someone else described or remember if you’d actually seen it in the first place. Even when we did remember seeing things—that Hemi-powered Wagoneer, the yellow Hilux, those Sherp things—we struggled finding them again when we wanted to.

Makes the case for circling things on printed maps, ya know? #hindsight2020

No line for the quiche vendor. Heard half a dozen people practically singing about how good it was while waiting for Korean BBQ from the Hibachibot food truck. Should have tried the quiche, but Hibachibot’s one of my two favorite food trucks in Phoenix—waited the heck outta that line.

Rest of the group finished their lunch, went back for beers. I’m still in line. Told them not to wait for me and we’d catch up later.

Stuck in line, shifting weight back and forth from one tired, achy foot to the other. Wondering how many people actually overlanding versus merely playing Overlander on social media. 8-10%, maybe?

Hard to shake the feeling most people there seemed more interested in branding than traveling.

So many done-up machines with neither dirt nor scratches on them. Maybe they’re all out in the festival-style camping areas; people who like getting away from it all sleeping in a dirt parking lot six feet from their neighbors.

Lots of tacticool clothing about. Wonder how many are ex-military, let alone legit operators. Feeling smug about my Hawaiian shirt nonconformity. None of these trucks got anything on a blue water sailboat. Notice my buy-it-for-life khaki cargo pants and amateur radio with upgraded antenna. I’m full of shit, too. Damn.

Where’s the Warn booth? I want to hang out with Andy and Mercedes. Consult the printed map. Fortunately, I can use the water tower and driving skills area to orient the map for some sense of direction.

A family of sunburned redheads tries appeasing a sunburned toddler in a stroller.

People crossing through the line grumbling about the lines for everything. Lots of people frustrated they can’t find someone or something. “It’s like there’s no rhyme or reason to any of this.”

Would have been nice if they grouped vendors by type or primary offering. Big trucks, light trucks, trailers, tents, accessories. Something like that. Wonder how many vendors would bristle at such a layout; being so close to the competition. Probably just the opportunistic, derivative players. 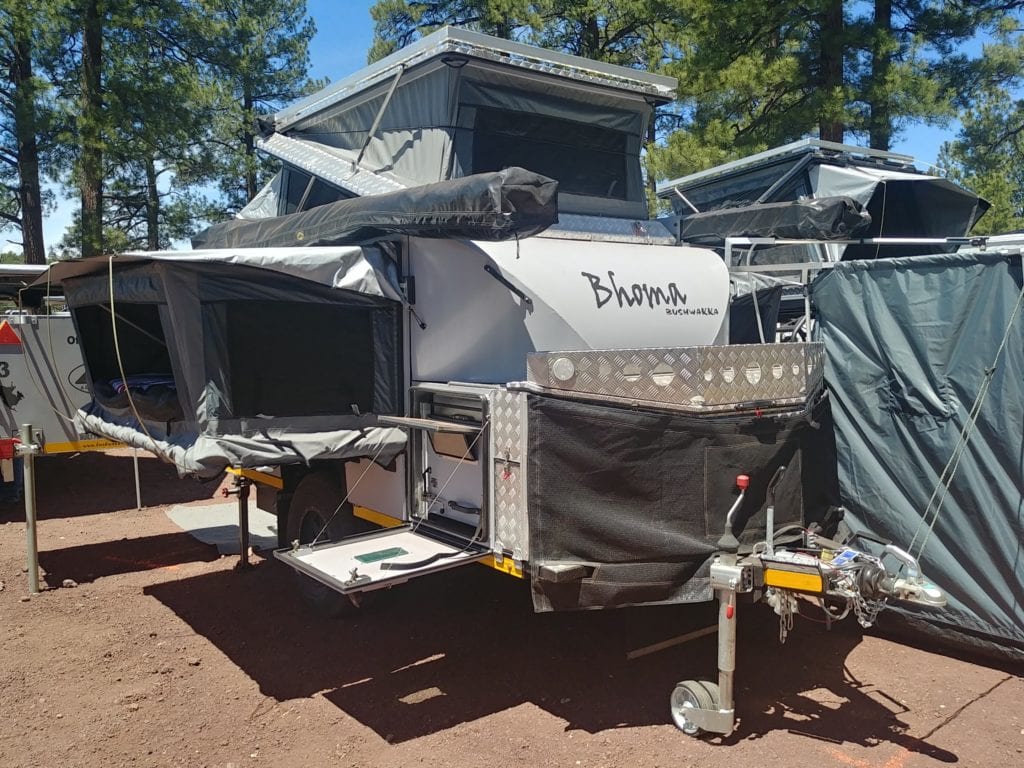 Still, seeing 40+ Sprinter conversions in one place would be incredible. Would the Earth Cruisers be next to the EarthRoamers? Probably a lot easier to spot the subtle differences in camp trailers when they’re parked next to each other, too.

Does anyone sell buy-it-for-life pants that don’t look wannabe special forces mall cop? Do they sell them in my size? I could use a new pair of not-jeans. Wish there was an area just for clothing vendors so I could actually do some shopping while I’m here.

And I bet the auxiliary lighting (read: LED) camp would be amazing once the sun started going down.

45 minutes later, finally have my lunch. Rest of the crew has moved on. Baofeng battery is dead. Can see the road to the Warn booth. Can’t get to it because of fencing. How the hell do I get out of the food court? Ah, opposite direction.

Andy offers a seat behind the booth. Introduces me to Brian. Todd happens past. We talk to John at fifteen52 about the history of the company. How does an aftermarket wheel company get started?

This is MY Overland Expo jam. Sitting down and talking to people who believe in what they’re doing and love their jobs. John used to be the marketing guy over at MOMO. You really gotta love wheels.

Warn booth is buzzing. Haven’t seen Mercedes. Andy says she’s wearing a blue Rebelle hat and is off doing the journalist thing. Todd and I head off in search of same.

Find myself unintentionally solo again, sitting on the—ironically—almost completely empty bleachers overlooking the driving and skills courses. Granted, watching regular Joes use ropes and pulleys and logs to lift barrels out of a trailer isn’t riveting, but there’s something sad about long lines for fast food and massive crowds drooling over gear while people who’ve actually driven around the world are practically delivering one-on-one coaching out back. Maybe they limit class sizes or something.

Get closer to the fence, hoping to spot Tim Hüber, maybe use my media credentials to get closer and see his training skills in action. Don’t see him.

End up having a most excellent conversation with Robert Scrivener III over a chain link fence.

Recognize his Instagram handle. Seen him around. Not currently following, but will now. Grateful to Marciniak for explaining how APRS worked in the rally car all those years ago. Easier to be self-deprecating about your (rusty to the point of being nonexistent) ham skills when you can competently explain some next level ham radio shit in context.

THIS is my Overland Expo jam. Two random strangers, making small talk over a chain link fence, finding common ground. Putting a face and a voice behind the handles. He remembers me and sends a personalized thank you note referencing our conversation within minutes of my follow on Instagram.

Pretty much done with Expo at this point. Could build a legit overland rig from scratch in a weekend at this thing—but I’m feeling more two-lanterns (by sea) these days. Most of these trucks easily cost more than a decent bluewater boat.

That’s probably where the more affluent overlanders will be in a couple years. I should do something with my Patreon account.

See about finding Bryon Dorr on the way out. He’s in meetings, but there’s free beer at the Ninkasi booth at 330. Deal.

Cross paths with Chris Cordes en route. He’s busy, but he makes time. Gotta get that guy on the podcast one of these days. One of my favorite people in the overlanding community.

Grab an easy-drinking ale and asada tacos at the Ninkasi booth. Catch up with Bryon. Another one of my favorites in the community. Commiserate on the consumer madness swirling around us. OXW has grown so much in the last decade.

Text message from the rest of the crew. They’re Audi 5000. Seems like a good idea.

Todd and I take the long walk back to the truck. Random dog runs up to us. Woman shouts, “That’s not Todd!” We laugh, shout back, “Actually, yes it is!” Laughing with strangers. It’s good to be surrounded by others who, by and large, are open to meeting new people and finding that common ground together.

A quick stop at Safeway in town to resupply a couple small things, then a leisurely drive back to camp.

Trucks are covered in glorious mud. Contact lenses are useless and on fire.

Crawl into the back of the truck for a 30 minute nap to recover a bit before a good six hours around the campfire.

Crawl back into the truck six hours later, run the heater while making the bed again. Sleep like a baby.

Can’t wait to do it again next year. 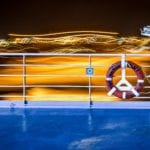 How to achieve the impossible