JDM Journeys of the Marital Kind

Wedding Day Jitters of My Own Making 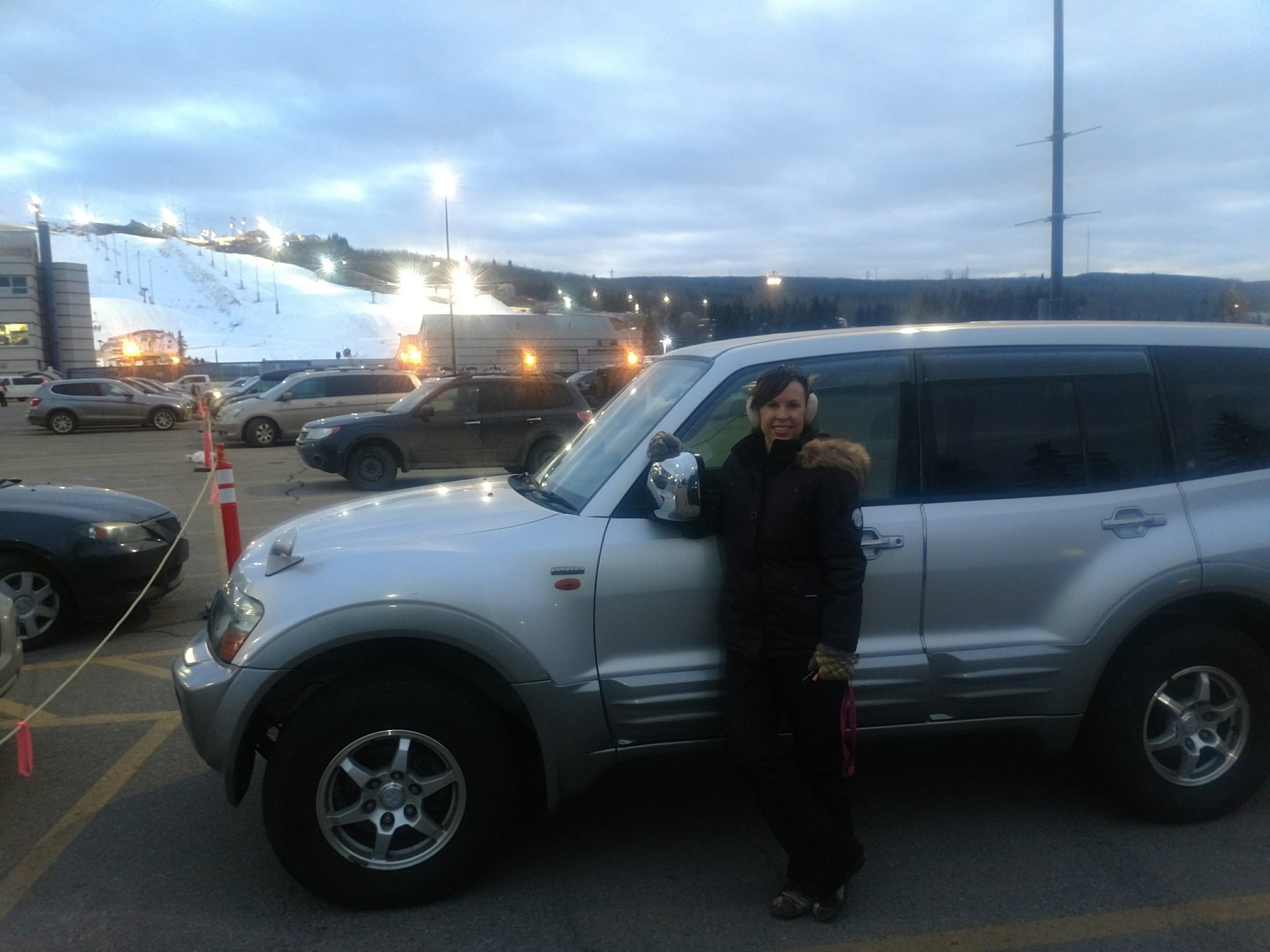 The weather has been ARCTIC COLD lately in my part of the world, so forgive me if I’m waxing nostalgia, instead of one of our Pajeros.

My better half has been driving Mitsu’s almost as long as I have, and has put up with many shenanigans along the way. Given that we just celebrated Valentine’s Day, I thought it might be good timing to paint our auspicious beginnings, by sharing a tale from our wedding day, and how a Mitsubishi 4WD, as usual, was front and center.

It’s a beautiful sunny day in St. John’s, Newfoundland, the most easterly city in North America. I’m driving a Fiji Blue 1989 Dodge Raider. Meanwhile Will Smith is singing about the “Wild Wild West” (prophetic, in hindsight), and some new blonde teeny bopper whines about a “Genie In a Bottle.” Clearly she’s a one-hit wonder. At three o’clock this afternoon I have an appointment at the church, where I am getting married to a great gal. But it’s only 10:00 AM and most of my “best men” are already assembled except one, who’s not off until noon. We should probably make the most of the morning, right?

We find a section of forest not too far from home, and enjoy bombing down some trails until almost noon when someone mentions we should probably be heading back soon. Maybe one more muddy crossing first…? 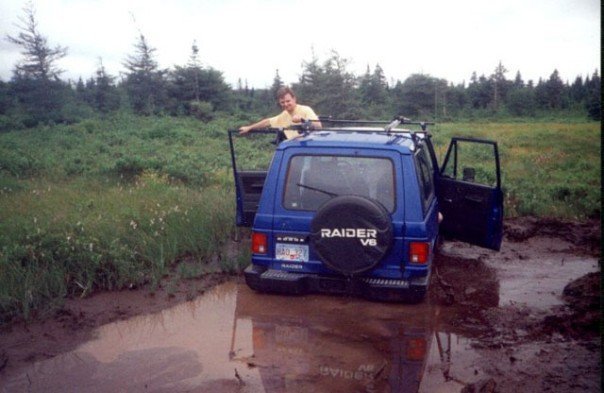 I almost make it. Almost.

My brother started pushing, after he took off his shirt to wipe the mud off his face. My tires dug deeper, and somehow his t-shirt disappeared under the wheels, never to be seen again. I was royally stuck. My buddy with the pickup wasn’t meeting us until later, and this was the late 90’s so even the Motorola StarTac wasn’t a common pocket item yet. The other rig along with us, a Suzuki Sidekick, was being driven by my fiancee’s identical-twin-sister’s-new-boyfriend (say that one three times, fast). My one tow strap was short by a country mile, and he smartly refused to drive into the mud, contending it wasn’t his vehicle.

He did volunteer to go get help…

An hour later the new boyfriend (eventual future brother-in-law) came back with a longer tow strap and, more importantly, leading my pickup-truck-buddy. With his 4wd Mazda B2600, he intended to hitch me out, so I could go get hitched. Several extraction attempts ensued, culminating in a running start yank, which thankfully did the trick. 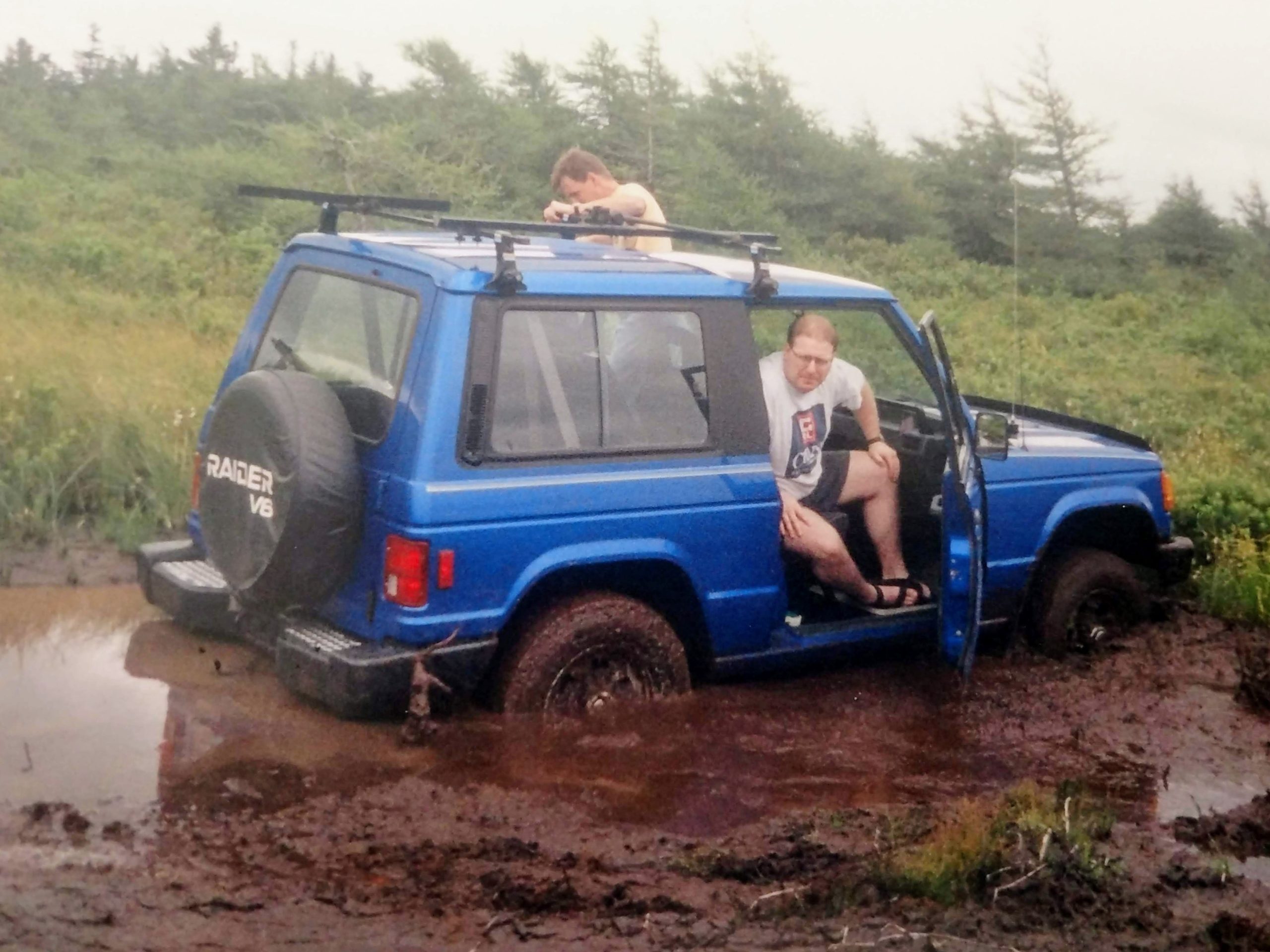 We mostly got back to my parent’s place, but without front and rear bumper corners, replaced instead by many more pounds of dripping mud. My Dad made me park on the street, hosed us off in the driveway, and made us leave our clothes on the lawn. Thankfully, someone had had the foresight to order pizza as soon as we got back. We were well under way to getting cleaned and dressed, and pizzas half gone, along with a few brewskies, when the phone rang…

My other brother-in-law, who’d recently arrived, called out: “Guys that’s the bride. And she’s right: we ARE supposed to be at the church by now!” Uh oh. Clearly taking my truck was no longer an option so I was chauffeured in style in a hastily borrowed LR Discovery. We arrived just ahead of the limo carrying the bride and her bridesmaids and hustled down the aisle to the front of the church (Apparently people WILL seat themselves if there are no groomsmen to usher them in? Who knew?).

Just as the wedding music started I remember feeling something prickle the back of my neck, and I plucked an errant clump of dried mud out of my hair as the doors opened at the back of the church… 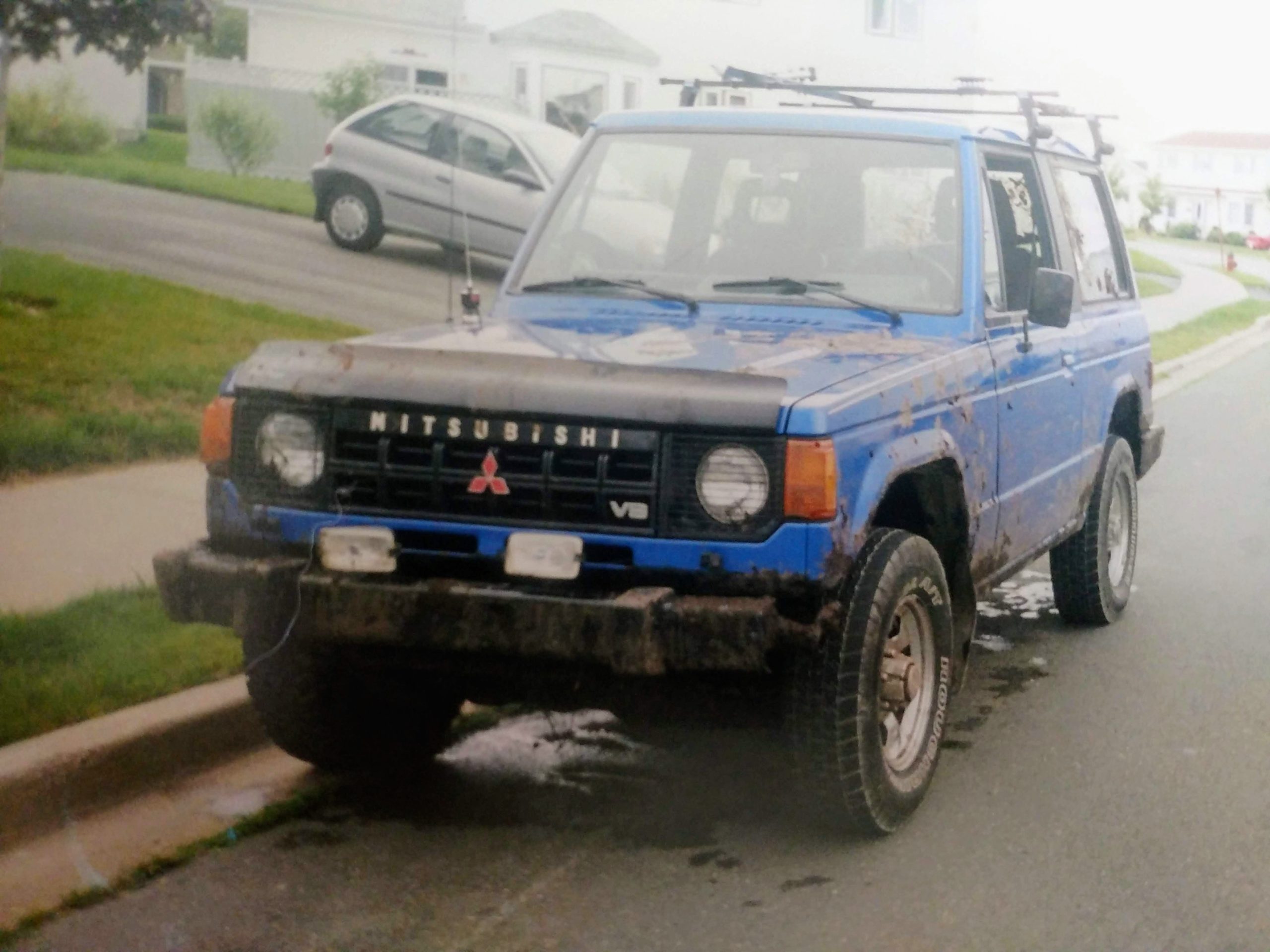 Later at the reception, we went outside the fancy hotel to get some air between dances when I noticed a small knot of people pointing and tut-tutting toward the back of the parking lot. Among the shiny vehicles was a very muddy blue Raider conspicuously surrounded by a pool of wet dirt. (One of the fellas had thoughtfully brought it to the reception for me.) My very understanding new wife rolled her eyes, said “I should have known…” and pulled me back inside.

19 years and 9 Pajeros later (as well as many other Mitsus), she still shakes her head at me, but I can detect a smile behind the eye roll as she continues on this journey with me. 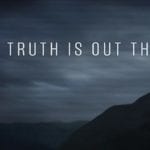 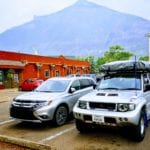