TGP20 | A Salty Dog in Berkeley

Dan drives a Montero. Dan lives on a sailboat.

I drive a Montero and want to live on a sailboat.

When I discovered this fact about Dan, I got his number and called him up. He gave me some good advice.

Suffice to say, while living aboard a sailboat makes for some of the most affordable housing in Berkeley, it’s like living aboard a project vehicle. That floats. In water. And will sink if not properly cared for.

Where do you think he works on his truck?

It all started a long time ago, once upon a time in Mexico, so to speak.

Waitaminute. Actually it started out even further back—with Double Indemnity.

Okay. You know what? Let me tell you where this conversation started.

Like most episodes, this one was recorded live in a Phoenix garage after the kid went to bed. My house isn’t very big, and the layout isn’t exactly conducive to recording a podcast indoors after the kid goes to bed—because there’s nowhere in my house where she’s not going to be able to hear me talking.

So I sit on a folding chair at a card table in my garage, where it was still over 100° at 9PM.

Dan’s house is a bit smaller. It’s a boat. A 47-foot Sea Ranger Pilothouse to be precise. His kid had just gone to bed too—but we’ve already mentioned he doesn’t have a garage. So he went topside and took a seat on the deck—on a crisp, 50° evening in the marina in Berkeley.

It was good times. 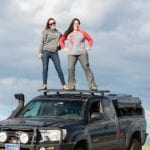 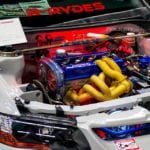