A Middle-earth State of Mind

[ Preface by Brian: You’re about to read something very special. Especially if you’re a parent, love a good adventure story—or both. This is the first in a multi-part series by our resident Middle-earth adventure guide, John Rimmer. John weaves a mean story. So sit back, relax, and enjoy. ]

Kids are a difficult variable in the “adventuring by vehicle” equation. Typically you throw two adults into a four-wheel drive with a paper map and a free weekend and you’ve got a sure recipe for a good time. Toss a kid or two in there and your math skills better be, well, let’s just say above average.

More planning, less freedom, whining proportional to age, and bathroom breaks squared…not to mention the financials of the whole thing, the real world numbers that we all use real math to deal with. It’s an inverse relationship: more kids means less money, and nobody’s pretending that this hobby of exploring the world by internal combustion is cheap. 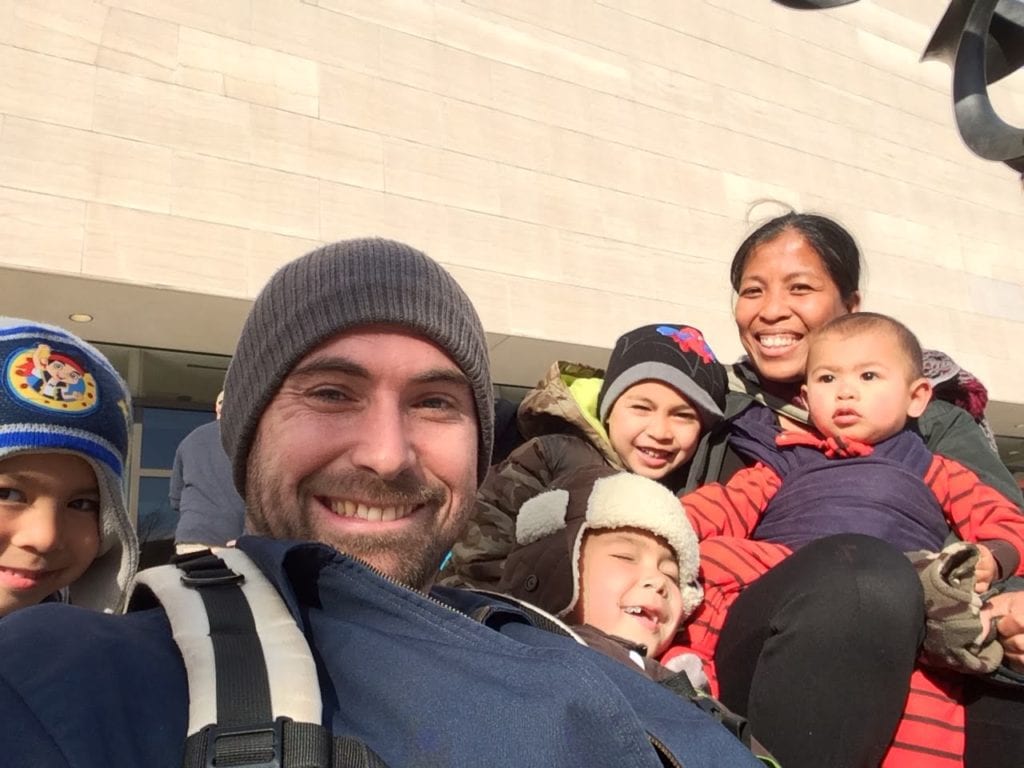 So what does this equation look like when you’re married with four kids? And what does it look like when those four kids are all five and under? I haven’t done any advanced mathematics since high school, and that was more years ago than I have fingers to count on.

Are we seriously considering this? Well…why not?

A Middle-earth State of Mind

Around our home J. R. R. Tolkien’s voice is a familiar one. This is especially true around the Christmas season. In addition to at least one mega Middle-earth movie marathon, there’s always some allusion or hint from his stories resonating somewhere in what we’re doing.

And I suppose the Christmas season is fitting for this. It’s the same season where the imaginative world of Tolkien’s writing career began, latent within letters addressed from the North Pole to his children. In annual letters later known as Letters from Father Christmas, Tolkien was laying some of the seminal ideas for what would later grow into the expansive stories of The Hobbit, The Lord of the Rings, and The Silmarillion.

All that began in a simple idea to bring a little extra joy to his kids around Christmas each year, and it’s in that same spirit, that same season, that same state of mind, that this story begins. 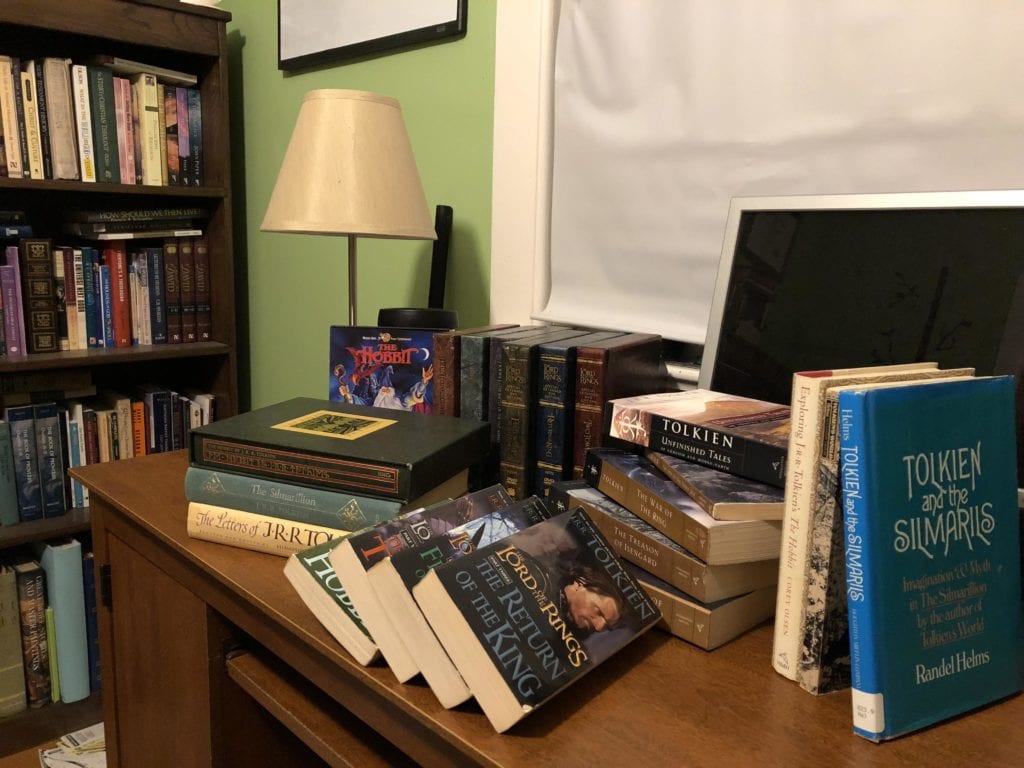 The movies introduced me to Tolkien’s world, of which I am ashamed to say I had never heard of prior (thanks public education system). But thankfully it did not take long to transition from there into his writings, as well as his philosophy behind writing itself, from which I have gleaned a great deal.

One of the main things I have come to appreciate the most about Tolkien is his approach to storytelling, seeing mythical fairy stories as a means of more seriously appreciating the real world, that real story we’re all a part of. Rather than stealing one’s attention away, good stories serve as the catalyst for a heightened apprehension of the realness of things. He writes:

“We must clean our windows so that the things seen clearly may be freed from the drab blur of triteness or familiarity…It was in fairy-stories that I first divined the potency of words, and the wonder of the things, such as stone, and wood, and iron; tree and grass; house and fire; bread and wine.”

This is why I’ve purposefully chosen to bring Tolkien’s mythology into my home, that I might help my children see, hear, taste, and feel the world they are a part of in indelible ways. Many would say the same kinds of things with regards to travel and adventure.

It Began with the Forging of the Rings

It’s easy to see the balancing effect Tolkien’s stories could have on my “adventuring by vehicle” equation, if only I could find something to elicit the kids’ interest and assuage the wife’s worries. I found my bridge in the forging of seven rings while at work (note that the picture only has six, haha…math be hard). 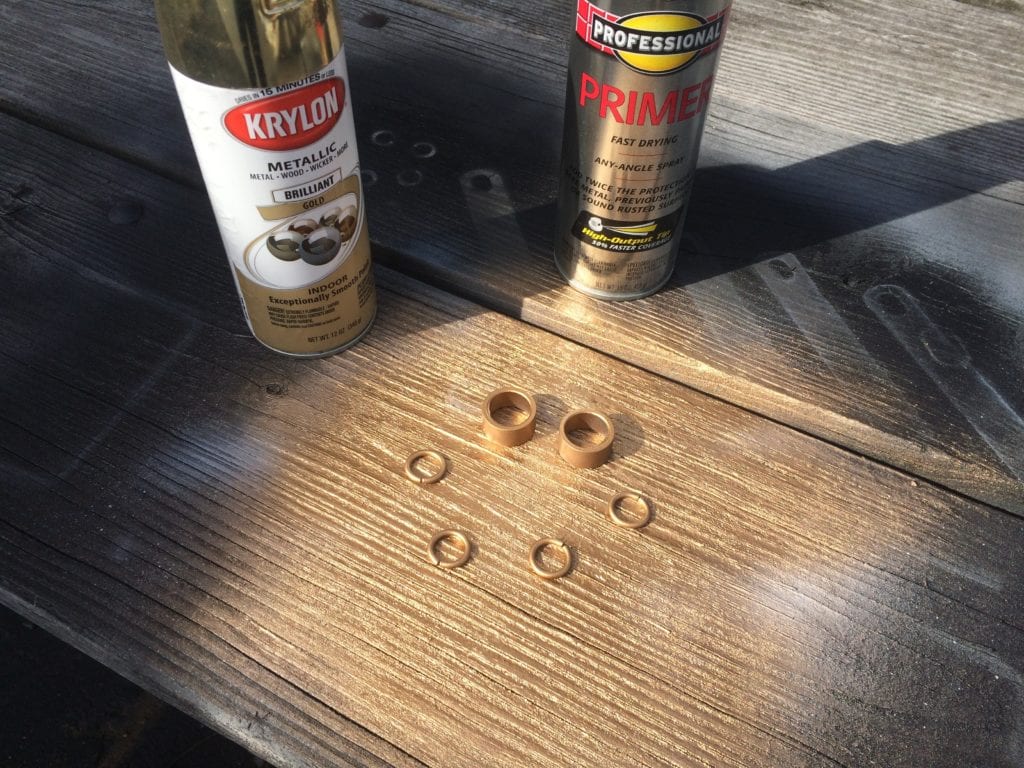 With all seven rings in hand I set off to plant the seeds of adventure in my boys, done in the re-watching of The Fellowship of the Ring’s introduction. They heard for the hundredth time Lady Galadriel say:

Three Rings for the Elven-kings under the sky,
Seven for the Dwarf-lords in their halls of stone,
Nine for Mortal Men doomed to die,
One for the Dark Lord on his dark throne.

“What do you guys think happened to the seven dwarf rings?”

An honest “I dunno” was about all I could expect out of my four preschoolers, but when I came home the following day with a cryptic map I claimed to have found hidden in the library, I knew I had their interest and attention.

My wife was even a little curious, though she had an idea of what I was up to due to the adult conversations we had been having about this whole crazy thing. Smiling, she grabbed the camera and helped get the kids out the door. We were about to go on an adventure, and though it would start a mere stone’s throw from our home, it would quickly expand to misty mountains, distant shores, magical waterfalls, and fearsome frontiers.

But first we had to find the rings.

The Elven Slums of Mechanicsville

Previously, in what was the closest thing to an elven forest I could find on the way home from work (assuming the elves in question were low-life drunken litterbugs due to the beer bottles strewn everywhere), I had hidden a small treasure cache. Four metal Ninja Turtles lunch boxes for four haole-pinoy boys. 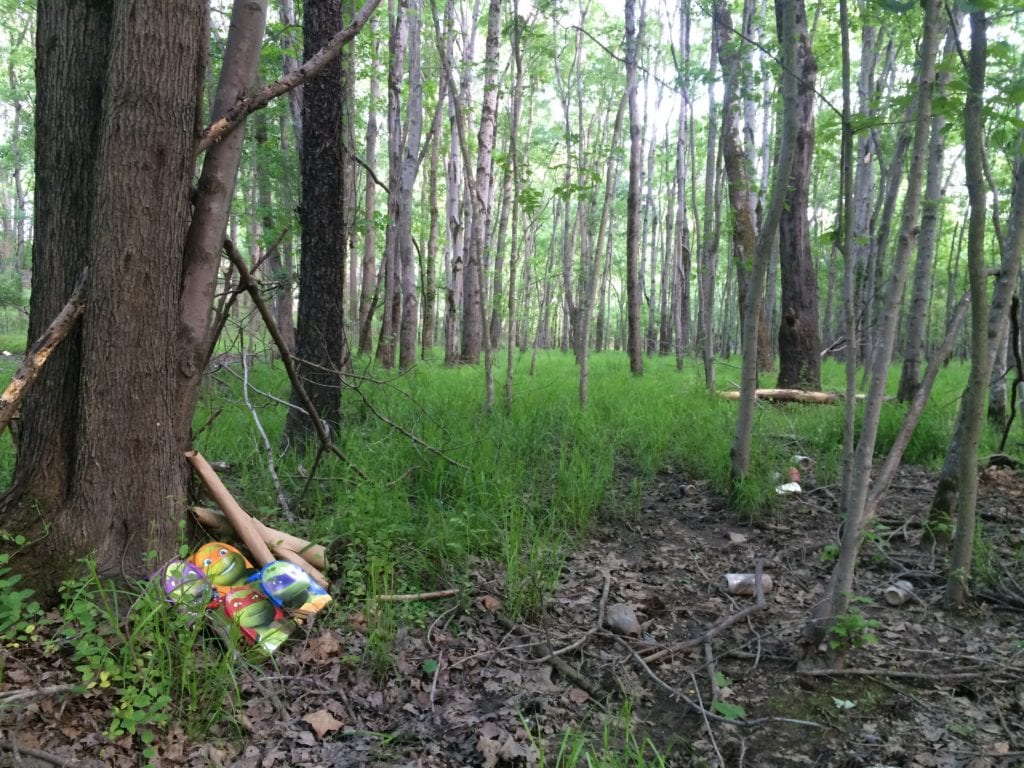 Treasure stashed, map in hand I went home, rounded up the excited brood, and returned to one of our hometown’s many Civil War battlefields: Beaverdam Creek. After a short hike, a little amateur cartography, and a big “It’s right over there!” hint from daddy, my boys stumbled onto the loot pile.

Again, I have four boys, and they have all self-identified as one of the Ninja Turtles very naturally.

They immediately knew which chest was meant for each of them. Inside they found all the gadgets and gizmos they’d need for the trip ahead: compasses, flashlights, Jr. Ranger badges they’d earned last year, ponchos, and other random junk I’d dug out of my “outdoors chest” in the attic.

The little guy, our one-year old, needed a little help opening his. 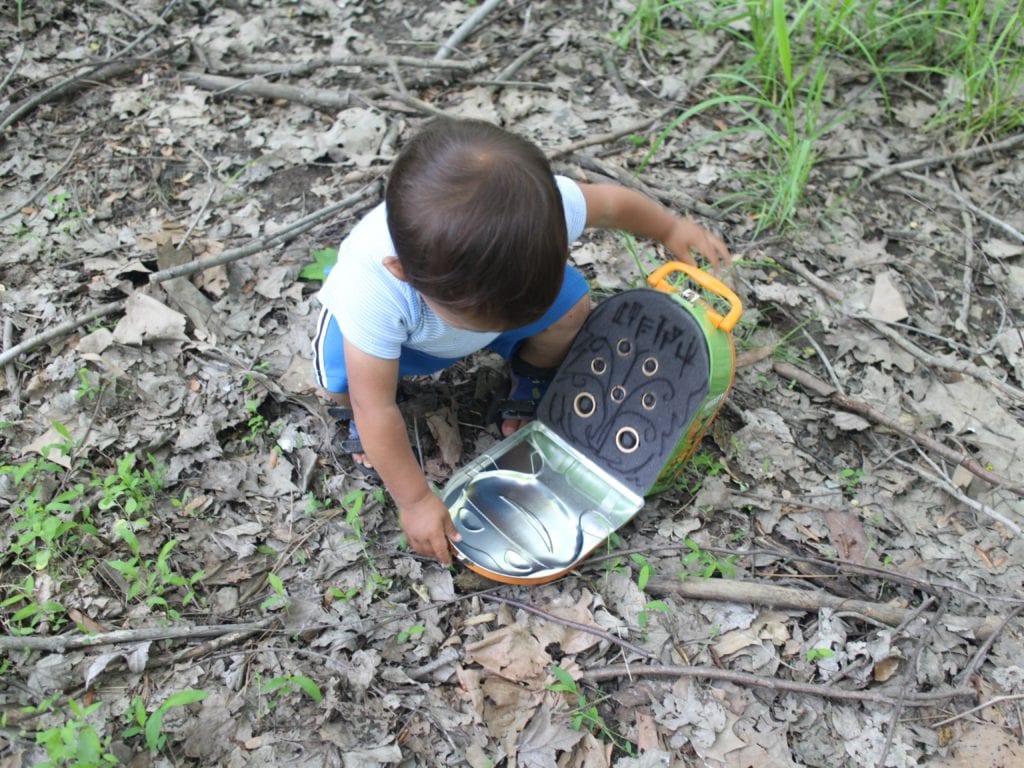 That’s why I intentionally hid the seven dwarven rings inside his Mikey chest. It allowed the excitement to build up, kinda like the moment you whip out that last big present on Christmas morning to a room full of wide-eyed “Oh my gosh! There’s more!?” expressions.

When the boys laid eyes on those repurposed and spray-painted chain links, letting out an overjoyed, “IT’S THE RINGS!”, I’m sure every drunken elf in a half-mile’s radius was roused from his stupor. As far as my young hobbit boys were concerned, they had just come into possession of all the necessary ingredients for an adventure…well, except that they didn’t know what to do with these accursed golden things.

That’s where the maps came in.

Along with each chest came a piece of a large map illustrating our intended route, and highlighting a number of important landmarks along the way. In the most Tolkien-like way I could, I explained that this quest intended us to destroy these seven rings, six by being cast into the torrents of magical waterfalls, and the seventh by being taken to the summit of Sharp Top Mountain.

With my wife’s gracious support I had planned out a five-day, 500-mile adventure by vehicle trip through the Blue Ridge Mountains of Virginia. She had taken care of all the food planning, clothes packing, and general keep-the-kids-alive type stuff, while I busied myself with maps, trip reports, decades-old camping gear, and one other all-important piece of equipment…our new to us ’03 Mitsubishi Montero. 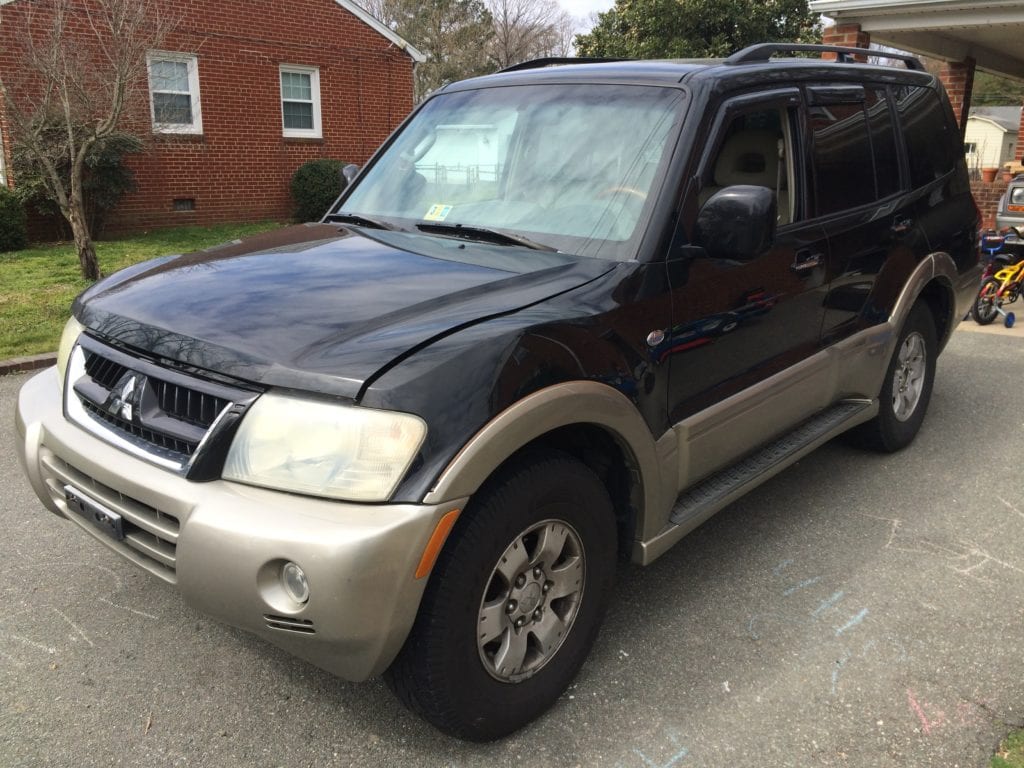 Much more to come…

“This tale grew in the telling, until it became a history of the Great War of the Ring and included many glimpses of the yet more ancient history that preceded it.”

– Tolkien, in the Preface to The Lord of the Rings 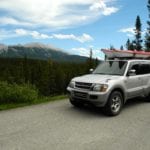 A Year in the Life of A JDM Pajero 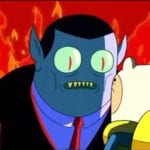